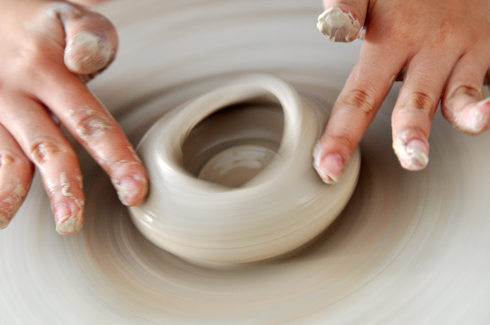 Bat Trang is the name of a famous ancient traditional ceramic village in Vietnam’s history. Situated at the left side of Red River in Gia Lam District, Hanoi capital, the Bat Trang village plays a very important role in preserving national cultural identity and diversifying traditional cultural values of Hanoi.

Located about 13 kilometres southeast of Ha Noi centre, the Bat Trang ceramic village is a popular attraction of many tourists, especially foreign ones. To get to the village, you can catch the bus No.47 (Long Bien-Bat Trang route) that stops near Dong Xuan market or ride a rental motorbike. Bat Trang village is said to be established in the 14th or 15th century in several documents. However, the villagers suppose that the village is set up earlier. There are two stories about the village’s origin. One of these tells that under Ly dynasty, in 1100, when the nation was in its independence and initial growth period, 3 scholars transmitted residents in Bat Trang all knowledge of the ceramic craft that they had learnt in a mission trip to China. In the other story, dates back to the 10th century, when King Ly Cong Uan relocated the capital in Thang Long, this place became busy and crowded with many businessmen, artists from different areas. The establishment and development of Thang Long strongly affected economic activities of surrounding villages, one of them were Bat Trang. Particularly, there was a lot of white clay in the village, a fine material to make pottery. For this reason, many potters including Nguyen Ninh Trang family decided to build the kilns here and named “Bach Tho Phuong” (the name was changed to “Bat Trang Phuong” later). Accordingly, Bat Trang pottery gradually developed and became favourite products not only in the domestic market but also foreign ones thanks to Japanese, Chinese and Western trading boats that passed by. In the 18th and 19th century, due to restricting foreign trade policy of Trinh, Nguyen dynasty, it was difficult for pottery products in Vietnam to be exported to foreign countries. This put some famous pottery making villages like Bat Trang, or Chu Dau ( Hai Duong province) into a hard period. Since 1986, thanks to economic reforms and development, more attention has been vested in the village and the world gets a chance to know more about Vietnamese porcelain through many high-quality pottery products. Bat Trang’s products are mainly exported to Japan, the Netherlands, Britain, Portugal, Southeast Asia, etc.

In contrast to the Chinese style of ceramics with its sophisticated technique and designs and insistence on perfection, the Bat Trang ceramics have more free-flowing designs. They are useful as well as purely decorative. Bat Trang ceramics are warm, friendly, well-used and well-loved. To make a good pottery product, the artists must follow strict steps including clay preparation, shaping, drying, decorating, glazing, and firing. After coming out of the kilns, the products are trimmed, smoothed, checked for quality, and packed for transport.

Over the centuries, Bat Trang pottery has produced mostly items for worship, such as lamps, incense burners and vases. Gradually, with market demand, house utensils appeared, mostly bowls, dishes and vases. Nowadays, Bat Trang produces many different types and designs of items including decorative items such as hanging dishes, vases, toy animals and reproduction statues using sophisticated techniques and technology. The Bat Trang art and craft of pottery gives us astonishing admiration for the talent of the village’s artists, they have created, from clay and fire, jade enamel for life. Visiting Bat Trang, you can take a walk or enjoy a buffalo tour for sightseeing and shopping. Besides many ceramic stores along the road in the village, you should visit Bat Trang Porcelain and Pottery Market where you can create your own ceramic product. Many youngsters and foreign tourists are interested in in this pottery- making experience, and spend a whole day in the market to make a gift for family or friends. Then you can go to some artists’ house to see the process of making ceramic products. You can have small talk with them and understand more about their hardness but full of passion.