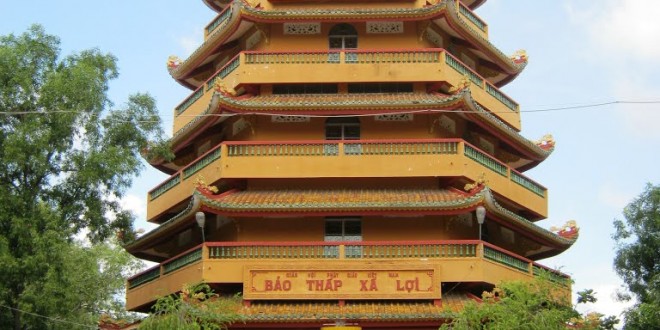 Giac Lam Pagoda is well-known for the oldest temple in Saigon. Located at No.565 Lac LongQuang Street,  Ward 10, Tan Binh District, the pagoda was built in 1744 by Ly Thuy Long from Minh Huong. At first, the pagoda was named Son Cam. Later, it is also called Cam Son because of its location on Cam Son Mound. The name of Giac Lam was only given until the Monk Thich Vien Quang of the Lam Te Zen lineage arrived and became the abbot of the pagoda.

During more than 250 years, the pagoda has gone through 3 periods of renovation in 1798–1804, 1906–1909 and1999. The current Giac Lam pagoda has a structure of the 3 Chinese letters including  3 adjacent main buildings: the ceremonial hall, the dharma preaching hall and the meal hall. The Giac Lam Pagoda attracts a lot of visitors thanks to the unique architectural complex and valuable antiques which are preserved for over 200 years. The most outstanding of the pagoda is the ancient town built in the early 19th. At present, there are 38 towers in different sizes in the pagoda. Most of them were designed in the style of ethnic groups living in the South region such as Khmer, Viet, Cham…with some Western and Oriental architecture such as French, Chinese and Indian style to make it perfect and distinct.

The pagoda has 113 ancient statues including 7 bronze ones, the rest are made of wood. There are many valuate Buddha statues such as Buddha Amitabha, Buddha Shakyamuni, Maitreya Bodhisattva, Samantabhadra Bodhisattva and Avalokiteshvara Bodhisattva… On the main pillars are engraved with meaningful parallel sentences.

In front of the pagoda plants a big bodhi tree. This is a gift from Sri Lanka’s great monk Narada in 1953. With a view to preserving these relics, a seven-storey stupa was built in 1970. However, the construction was put off because of war and only finished  until1993.

The Giac Lam pagoda was officially recognized as a national historical site by the Department of Culture and Information on November 16, 1988.