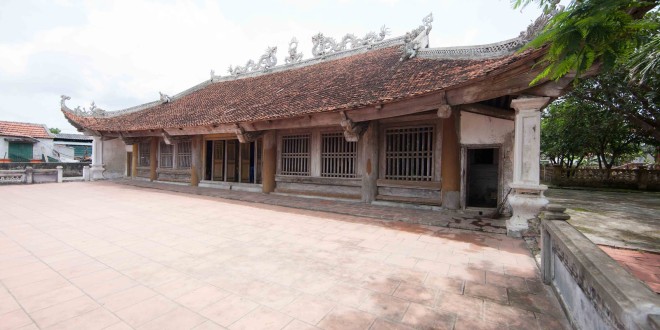 House to each Viet is something more than a place to live. It’s where the childhood memories of one person belonged to, where to find peace and happiness with our loved ones and the foundation to build our future.

Outside of Hanoi: Ancient Villages

Vietnam has a long-aged agriculture culture which requires a self-supplying system of villages. Unlike nomads, settlers value their houses more than anything else. The farmers live under house’s roofs, store the grain and their work equipment inside the house, give birth to children and raise them also in their houses. The house is also where weddings, funerals and feasts take place as well as the most solemn place of the ancestor altar with all worshiping and rituals practiced monthly. House is not just a place: it’s the soul of Vietnam people.

When I talk about the village house, I talk about the traditional house of Viet (Kinh) people who take up to 90% of the total Vietnamese population. To Kinh people, building a house is the most important work of lifetime and it comes first before others. A Vietnamese village is a distinctive community in which each house at the same time is both private and open. The structure of a traditional Vietnamese house can follow many styles, but there are two most common types of design that are: first is main house and sub-houses – this style is typical in Red river delta; the second is character Mon (門) style – this is the style of rich families with the main house lying in the center and 2 wing-houses in 2 sides. In the long history of Viet people, they have developed an architecture that is friendly with nature. A traditional house consist one main house, wing houses, a garden, a fish pond, a poultry and cattle breeding ground, a drying yard, fence, gate. We are amazed at the knowledge of farmers on building the house layout on a closed chain of biological energy, or on a biological exchange flow. Therefore, they make the house and arrange their life activities in a harmony with nature to facilitate a balance to remain a stable and healthy environment.

Nowadays, in Bac Ninh province or in ancient villages around Hanoi and other provinces, we can see there are still a lot of traditional styled houses. The main house is the most important part, which has a 1, 3, 5 or 7 rooms and two-wing house covering an area of 70 to 80sq m including the front lobby. The height from the ground to roof top is 7-7.5m. The three main rooms in center are always for ancestor altar and welcoming guests, father’s or husband’s bed is placed in this room while wife and children sleep in the wing-houses or sub-houses. The central room is the “face” of the whole house and therefore the room is decorated very carefully. The two wings are for sleeping and storing the precious things and rice. The smaller house is used for kitchen and storing the peasant’s tools. The doors of the main house are sometimes removed to connect the space inside to the yard outside. The garden often decorated with the line of areca in front and the bush of coconut at the back. Vietnamese people know how to combine two-side fact of the yin yang, in which cooperating the architecture of construction with the outer landscape, placing the house orient in the cool one. Every part of the house is like a part of a body; by placing the part in its right place in harmony not only with the other parts but also with other bodies and nature, Vietnam people make the body healthier that can last for hundreds of year. 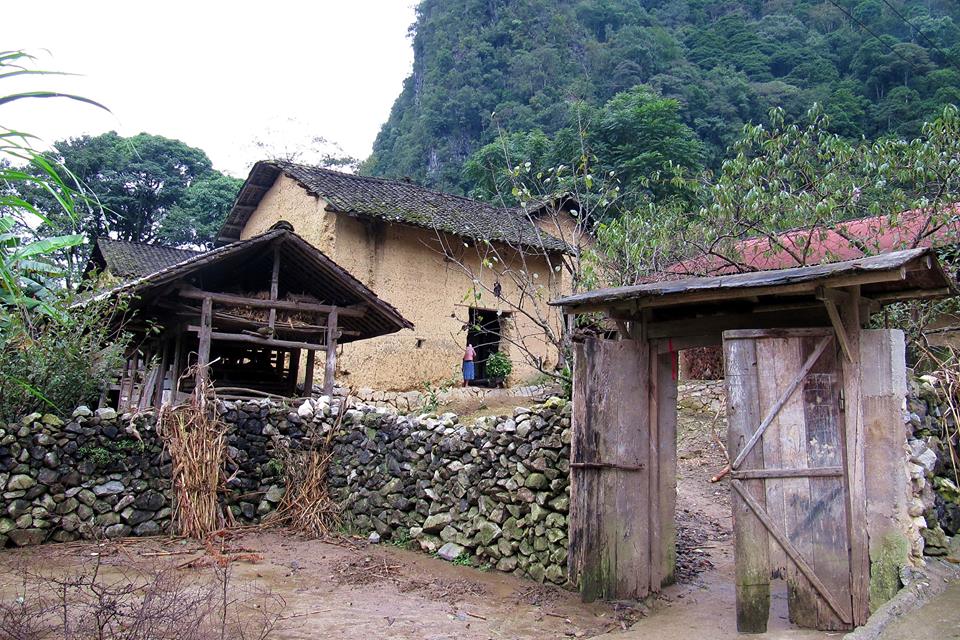 H’mong people mostly live in mountainous areas so their houses must be cool in summer and warm in winter, safe enough to protect them from beasts. The soils of foundation must be chosen very carefully. After choosing qualified soils, come the ground leveling, foundation making and wall making. Women are forbidden to enter the building ground so are strangers. To make walls, a wooden mold is made which is 1,5m long and 0,45-0,5m wide. Soils that has no tree roots, grass or rocks is filled in the mold. Long wooden boards are used to press on the soils to make the wall stable. After done making the walls, the house owner chooses a suitable day to come to the forest to get woods to make roof, doors, etc. 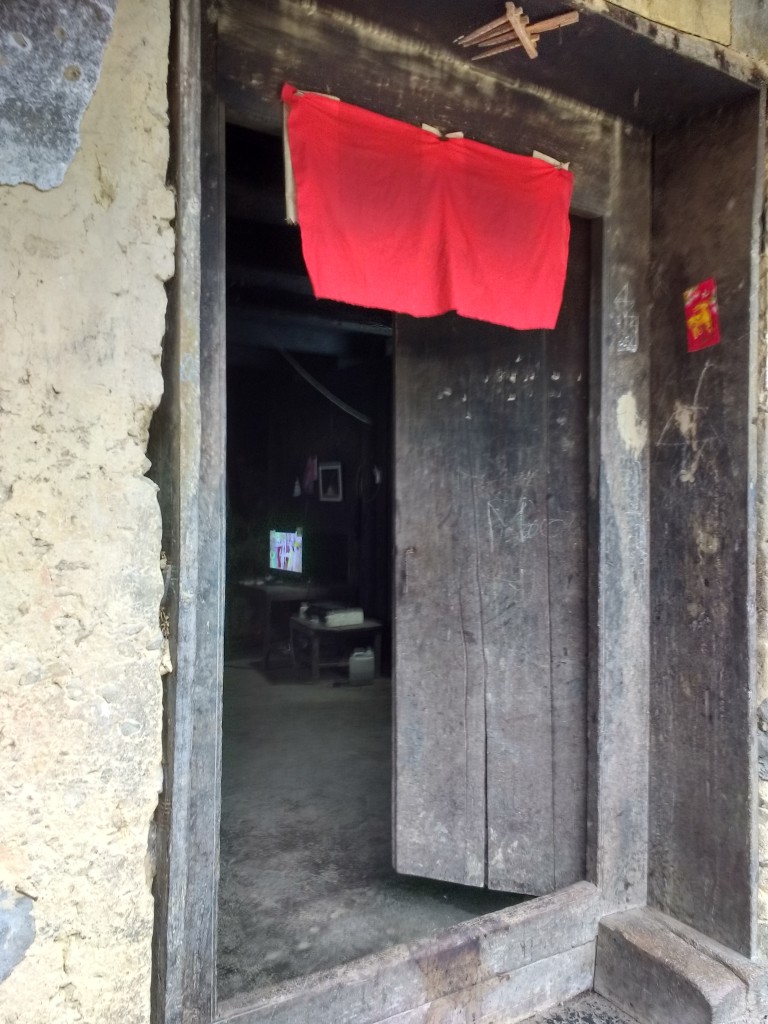 The structure of the house is a three-room main house with 2 doors (1 main gate door, 1 door and at least 2 windows). The house may have one or two wings separated with the main house. The three-room house is arranged with the left room which is used for kitchen and sleeping room of wife and husband, the right room is guest’s sleeping place, the central room is larger and the place for ancestor worshiping, family meals, guest welcoming. The main gate door is only made of finest wood such as apricot or cane. H’mong people think that when a person opens a door gate it’s like he enters the abdomen of another person, so the hinges and latches must be made by woods only. Another characteristic of H’mong architecture is the stone fence surrounding the house. This fence is built by family members for months by picking up rocks on the roads. Cattle barn stands angling to main house and its location is chosen depending on the wind direction. Because of the great love of H’mong people for their cattle, sometimes the barn is even better made than the house and taken much effort from the owner. They even give offerings to the barn ghost when the barn is done to ask for fast growing and easiness to raise.

Around the house, H’mong people plant a lot of plum and apricot trees. In spring, the gray roofs are hidden behind the white and pink clouds of flowers making great scene of mountainous nature and humans.

Stilt houses can be found in every highland province in Vietnam. Suited to flood-prone plains and to steep mountain slopes, these houses remain popular among many of Vietnam’s 54 different ethnic groups. 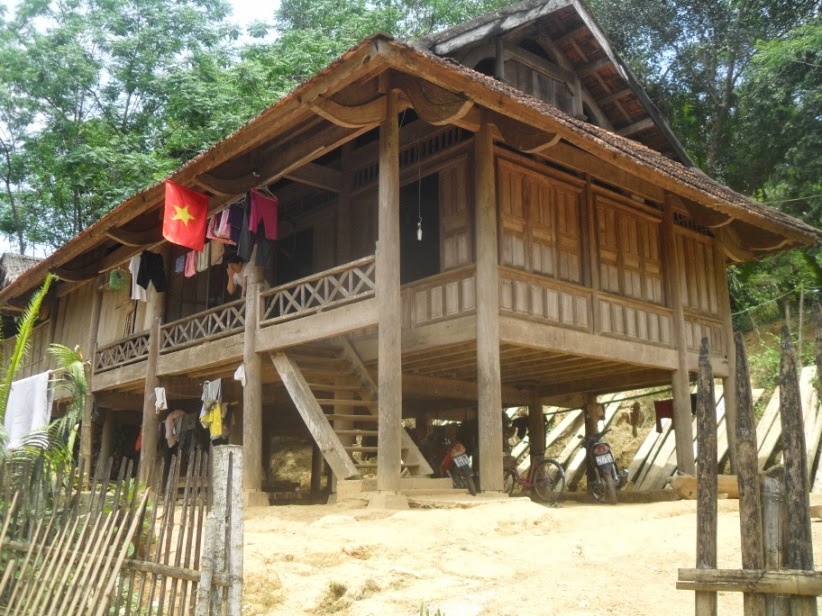 Thai people live on stilt houses. The houses are made of rattan, bamboo, cork, or wood panels which are extremely solidly designed. A typical stilt house has two staircases on the left and right sides. The walls are made from thin boards. The roof rests on one or two pillars and two beams. The houses are quite large containing palm leaf roofs and bamboo-slat floors. Thai people divide the living space into two: a higher level, restricted to family members, is used for worship, relaxation, and sleep; the lower level is where the family entertains guests, cooks and weaves. 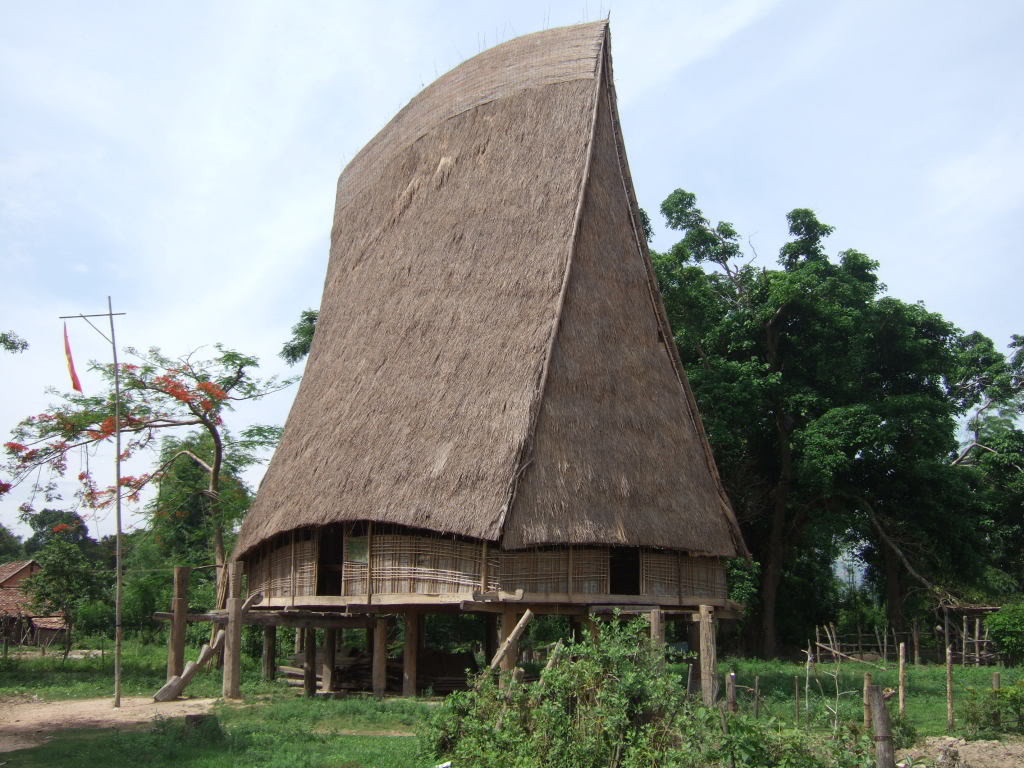 Rong house is traditional communal house of many ethnic minorities which is a pride of northern central highlanders. Rong house is built when a village is founded and all villagers must join to complete the house. A special thing about the house is that visitors when come to the village will see this house from all directions. The Rong house is the place where all activities of the village take place especially festivals, meetings, ceremonies, weddings…. From the outside, the house is very outstanding with its giant roof made of yellow-dried gianh leaves and 8 big wood pillars. The roof is incredibly tall, steep and in a shape of an axe blade. Ba Na people use many symbols which are referring to the image of the brilliant God of Sun to decorate the Rong House.

Long house of the Ede

Longhouse of Ede people is a lower stilt house but much longer. The length varies from 15m to 100m depends on the amount of people living in. This is the most outstanding symbol of ancient matriarchy in Vietnam. Longhouse is the living place of a whole clan and often lengthened when a female member gets married. There is an anecdote that if a person bangs a gong at the beginning of the house, the sound becomes very faint when it reaches the other end. Traditional long house was built with materials of wood, bamboo. The roof is thatched with grass with a thickness of over 20 cm, and never needed to be reroofed. From rooftop to the floor, it’s about 4-5m high and the space under the house is about 1m high was used to keep cattle. The area close to the entrance is the place to welcome guests where they place items such as main hearth, guest’s chair, host’s chair, long bench (Kpan) which can be 20m long and made from a whole wooden truck. Gongs and chieng are hanged on the wall for decoration. The rest of the house was for cooking and sleeping rooms of couples.

Trinh Tuong house is traditional house for many minorities such as H’Mong or Ha Nhi. From afar Trinh Tuong houses resemble giant mushrooms overshadowed by mountains. The houses of Ha Nhi people are built just the same way as H’mong people build their Trinh Tuong house. The difference is the soil must be reddish clay. A Trinh Tuong house is built on a flat plot of around 40 to 50 square meters.The earthen walls are 40 to 45cm thick and measure four to five meters high. Originally, the roofs of Trinh Tuong houses were made of straw, which shone brightly in the sunshine. One of the most fascinating things about Ha Nhi ethnic people’s house was that there are no windows in their houses. Roof holes, there are one or two but windows, none. Houses are said to be cool in summer and warm in winter. It is always dark inside the house where Ha Nhi People sleep and cook. Because of the chilly weather all year round, Ha Nhi people always store firewood in their yard just in front of main entrance into the house. 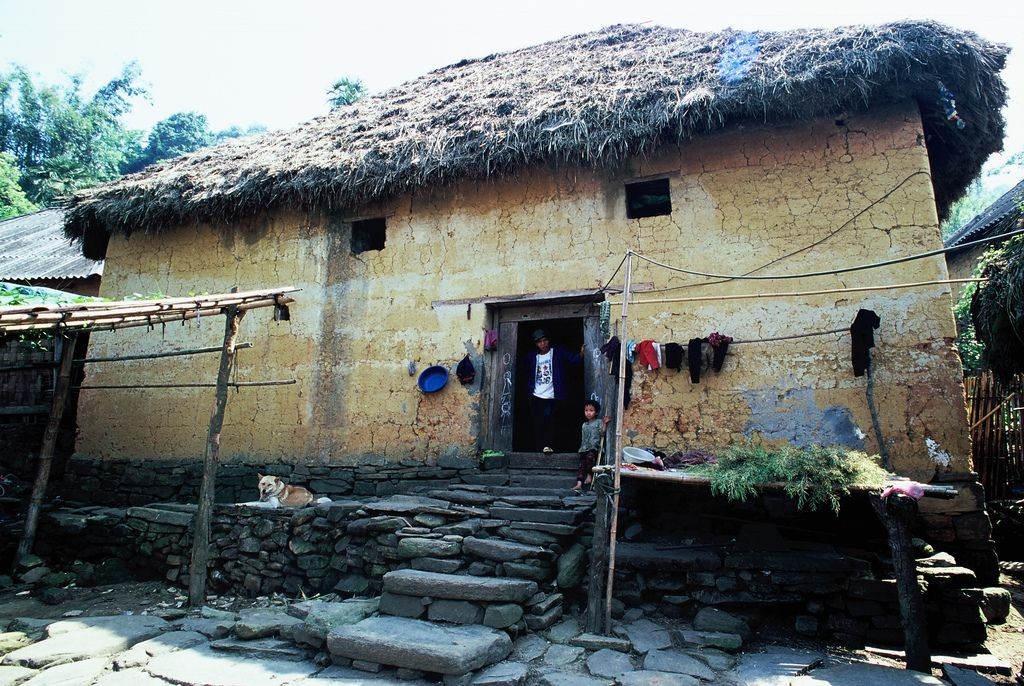 To know more about Vietnamese culture, we have to look into the traditional houses of many minorities in different regions. There we will find not only architecture but also creativity, knowledge, spiritual beliefs, strength and above off all, national characteristic that can’t be mistaken to others. House, to Vietnam people is always home, the place to return to, to cherish and protect.