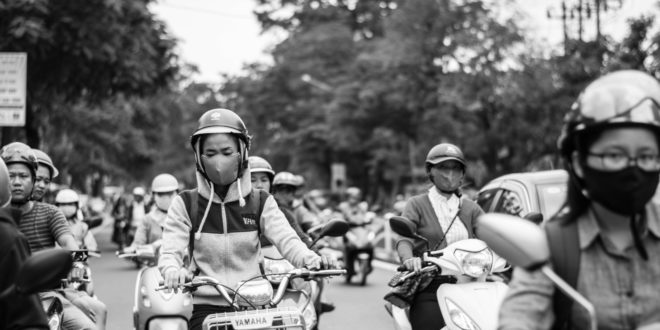 When thinking of Vietnam, you probably imagine the beautiful nature and lush landscapes with its plenty of rice fields, mountains, the gorgeous Ha Long Bay, or the women with conical hats. You might even think of the war, or biking around among an ocean of other riders. In the past 20 years the use of motorised vehicles grew exponentially and according to recent statistics both Hanoi and Ho Chi Minh City have almost as many motorbikes as inhabitants with 6-7 million bikes in Hanoi and 8 in HCMC. It isn’t illogical to think this bears heavy consequences on the environment.

The pollution in Vietnam is mainly due to 2 major causes; the war and the rapidly growing economy. During the war, Americans used toxic pesticides also known as Agent Orange which still affects the quality of the soil, led to water contamination and is nefarious for the general public health. Besides the air pollution caused by the massive amount of motorised vehicles, nuclear power plants, water pollution, excessive use of disposables and plastic and an inadequate waste disposal system are factors that cause the general pollution of Vietnam.

According to the National Environmental Status Report for 2011-2015 there would be 30 000 people dying yearly because of air pollution. In comparison, in 2016 8000 people died because of a motorbike accident. Occasionally the news features statistics of the extreme peaks of air pollution with scores similar to Beijing, or situation in which water is being contaminated by industrial companies with as result the death of ecosystems in rivers and lakes. According the EPI (Environmental Performance Index) Vietnam is ranked 164th of the 180 and thus one of the worst countries in the world.

At the moment of writing this article both in Hanoi as Ho Chi Minh City, the government is building a metro line which should stimulate the decrease of the number of motorbikes in both metropolises.
Furthermore, seven wind power plants are already working in Vietnam and plans for both wind and solar energy projects are bound to be realised. Vietnam realises that she has to make some effort because the air quality is on average 2x-5x as much as the World Health Organisation (WHO) dictates. With projects such as the new metro line, the renovation on the public transport system, revoking of out-dated motorbikes and the search for projects in renewable energy (by 2050 Vietnam wants to get 43% of its energy result from renewable sources) and projects in saving drinkable water, like that of Upcylcing Vietnam which fight water contamination in Can Tho, there definitely is hope for a greener future. 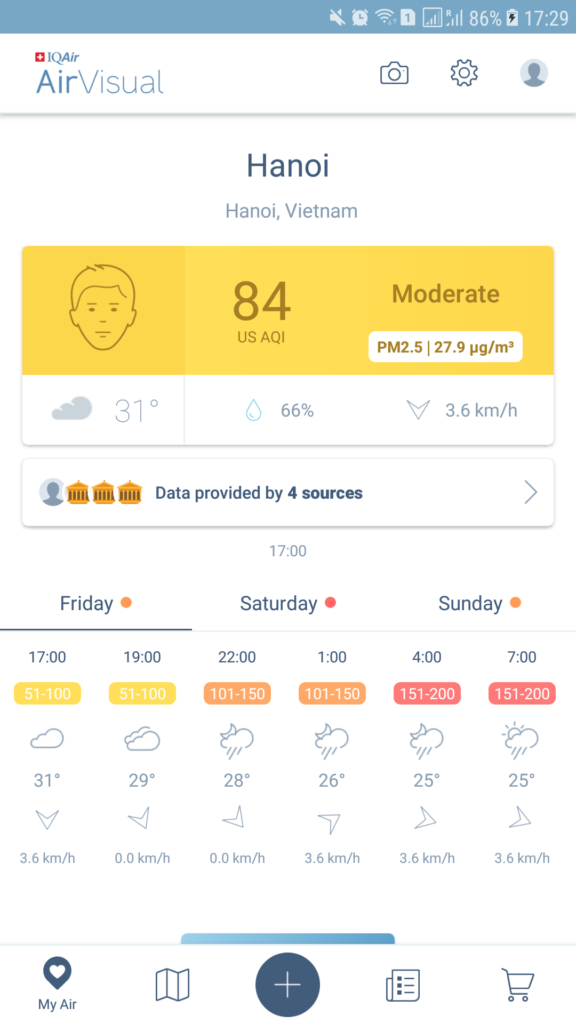 What can YOU do as a tourist or ex-pat in Vietnam?

Firstly, it is important to protect yourself and be as safe as possible.

AirVisual is a company that provides equipment to measure regional air quality. They also have a website and app you can download on your smartphone and is available for both iOS and Android. The app shows you clearly the actual air quality, a prediction for the next few days and an explanation about precautions. The app uses different sources for an accurate level of measurement and gives the results in both PM2.5 as PM10, which is the fine particular matter smaller than 2.5 or 10 µm. When staying in Vietnam long term, it is advised to buy an air filtration system for indoors as well.

Furthermore, it is a good idea to purchase a decent pollution mask, especially when you go out in traffic such as riding a motorbike. Everywhere in Vietnam, it is easy to find yourself a disposable surgeon masks or masks out of fabric. However, we advise you to invest a little bit more money for a quality mask with a filter which won’t let the fine dust come through. Advisable brands are 3M, BDAC or Mesh Mask.

It is also recommended not to drink tap water and if you get or buy bottled water to check if the seal is still intact. Brushing your teeth with tap water is no problem. All around Vietnam, you can buy bottled water in different sizes and it is cheap! A small bottle of 0.5l is around 5000 VND (0.20$) and a bottle of 1.5l around 15 000 VND (0.60$), but you can also buy water by 6l or even 20l.

When travelling to and in Vietnam, one should also consider trying to travel in a sustainable manner, which is ecotourism to minimise the impact on the environment. Try to avoid or refuse plastic wrappings or bags, use reusable chopsticks and say no to plastic straws. Also, plan your way of transportation and choose public transport over a private car or take the train instead of a domestic flight. The latter is also lots cheaper and more adventurous!

If you want to contribute, even more, you could consider being a volunteer with organisations that try to help minimise the impact on the environment. For example, in Hanoi there is the group Keep Hanoi Clean that tries to get rid of the littering and waste all throughout the city.

Nevertheless, with these tips and information in the back of your mind, we hope you will enjoy your time in Vietnam because even with the pollution Vietnam is a magnificent country with beautiful landscapes, delicious food and incredible people! 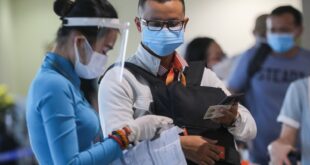 Good news for those who plan a short trip to Vietnam. The electronic visa (e-visa) …