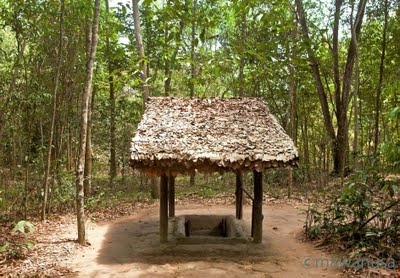 In the resistance against French colonialists, thousands of people in Cu Chi lived in tunnel system with complicated subways.

The tunnel stretched approximately 200 km with ventilation systems hidden under the bushes. The tunnel system was built in the late 1940s on the territory known as “steel ground” and situated at the end of Ho Chi Minh trail. In the campaign of 1968, National Liberation Front for South Vietnam used the tunnel system to attack Saigon.

The local people were digging the individual cellars and tunnels to avoid raids of the French and provide the shelter for Viet Minh. At first, each village had its own tunnel and then due to the demand on travel among the villages, the tunnels were linked to one another to form a complicated continuous system of tunnels. The system were later expanded to other places, especially 6 communes in the North of Cu Chi. Structure of the cellars, tunnels were improved to serve as hiding spots, as well as  communication during combat. During period of 1961-1965, the Northern communes of Cu Chi completed the main route of tunnel called “Spine”. Then, the units, unions, and agencies developed the subsidiary tunnels and connected them with this route to form continuous tunnels between hamlets, communes and regions. On the ground, soldiers and inhabitants in Cu Chi dug an interlacing belt of communication trench connecting with the tunnel system. At this time, the tunnels were also divided into many layers, ways. Further, many mine fields, spike-traps, nail holes were laid into continuous clusters, creating firm battle field in the guerrilla war, called “fighting commune”.

By 1965, the system of tunnels is 200 km long in total with 3 different layers. The top layer is 3m deep from the ground, the middle is 6m, and the bottom is over 12 m deep. The tunnel now was not only the shelter but also the residence, weapons caches, meeting place of people to watch TV, art performance. However, due to the difficult living conditions in the tunnel as sunlight shortage, moisture, heat as well as poor hygiene conditions, sickness was rampant among the people living in the tunnels, especially malaria. Therefore, after the war, there were only 6,000 out of 16,000 soldiers alive. Besides, the lack of food and necessities was also the biggest problem of the inhabitants living in the tunnel.

The U.S military’s desperation and failure

During the Vietnam War, Cu Chi Tunnels was a big frustration and tough question to U.S. military and The Army of the Republic of Viet Nam. U.S.A and Australia used to try to find out and penetrate into the tunnels in many ways. However, their attempt led them to nothing. The U.S. military even used bulldozer to clear out the forests, villages, vast fields and spread Agent Orange, napal bombing, poured gasoline to kill fauna and flora. Yet, the Viet Cong remained safe and continued living and fighting for Vietnam country.

After realizing that chemical war did not work, the American began to send soldiers, who were called “tunnel rats” into the tunnels. They were equipped a gun, a knife, a flashlight. But, owing to the complex system of tunnels, most of them could not find the way out and were dead in the tunnels.

U.S.A used German shepherd dogs to look for cellar’s door and Viet Cong soldiers. And once more time, the Vietnam guerrillas disabled the dogs’ ability by washing with American soap and wore U.S uniform at the same time to make the dogs confused. Particularly, many dogs could not spot the traps and many of them were killed or injured.

Finally, in the late 1960s, the U.S. started carpet bombing in order to destroy the tunnels and the surroundings of Cu Chi. However, this action also became useless because the U.S military lost the war at the end.