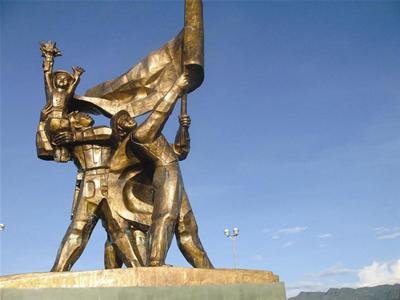 Dien Bien Phu is a provincial city of Dien Bien province in Vietnam’s northwest. The city lies in Muong Thanh valley with approximately 20 km in length and 6 km in width. This is why it is also known as “Dien Bien basin”. Dien Bien Phu is regarded as a big bordering city because it is only 35 km far from Lao border-gate. Dien Bien Phu is 474 km from Hanoi along National Highway 279 and 6. It borders Dien Bien Dong district to the southeast and Dien Bien to the other directions. Dien Bien city is well-known for Dien Bien Phu battle in 1954 between Vietnam army (led by General Vo Nguyen Giap) and French army (commanded by General Christian de Castries). The battle had a significant meaning in putting an end French’s role in Indochinese peninsula and resulted in the agreement on dividing Vietnam into 2 parts: South and North. The Dien Bien Phu battle is considered as the greatest victory of Southeast countries against an European power. In this battle, Viet Minh forces transported their artillery to surrounding hills of Dien Bien Phu base and attacked the flank of French’s army. Thanks to the huge troops and logistics , Viet Minh created one of the most important victories in history of Vietnam war.

The climate of province is mountainous tropical divided into 2 seasons: rainny and dry seasons. The annual average temperature is around 21ºC – 23ºC. By land, Dien Bien Phu is adjacent to Muong Lay commune via road 12