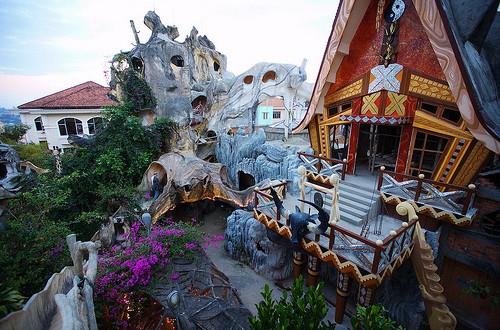 Da Lat City, Lam Dong Province has a famous guesthouse that was listed as one of the top 10 most unique architectures. The guesthouse is an interesting attraction drawing a lot of curious visitors travelling to Da Lat. At first, it was named “Hang Nga Villa” but then being changed to “Crazy House”. The designer of the house is architect Dang Viet Nga. Located at No.3, Huynh Thuc Khang Street, the house was inspired from poetic nature in Da Lat and works by Gaudi.

Entering the house, visitors feel like living in a forest in a fairy tale with interlacing green climbers sticking on large old trees. The house is full of concrete animals and giant mushrooms. The base of the building is a tree, which can be seen especially from the outside. Huge tree trunks and branches try to make you believe that this is a tree-house instead of a house-tree. Following the snaking stairs, visitors will see small well-equipped rooms. They are placed in the cave-like hallows and named after the animals such as bear, tiger, kangaroo, eagle… All the rooms have distinctive architecture and small furniture which are carved in conformity with curved walls. The windows in each room are shaped weirdly, some of them are convex and the other is concave. Nothing follows a certain rule. Crazay House consists of 10 rooms. The room price is not cheap at all. This is considered as one of the most attractive destinations in Da Lat and discussed a lot in the guide book. Its unique architecture was praised by many foreign magazines. The Rediff Business elected Hang Nga Villa as one of the top 20 world’s most unique houses and the People’s Daily in China picked up it to be one of the strangest houses in the world. Recently, the Dailymail (UK) also released an article to compliment the house on its architecture.

“Hang Nga Villa” (named after architect Dang Viet Nga) was built on an area of about 2,000 m2 in 1990. The designs of Dang Viet Nga are all created by local artisans. The architecture has been completed and expanded so far.