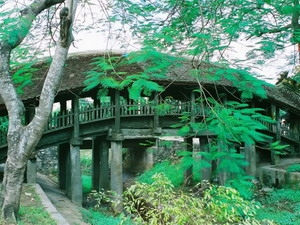 Aside from Hoi An bridge pagoda, Vietnam has many impressive covered bridges in Hue, Nam Dinh and Ninh Binh such as Thanh Toan, Thuong Market, Luong Pagoda and Phat Diem bridges. The common feature of these bridges is wooden material and roof tiles. Despite being small bridges crossing the river, they are really attractions to tourists.

Hoi An Bridge Pagoda
Out of unique covered bridges in Vietnam, Bridge Pagoda is the most familiar to domestic and foreign tourists. The bridge is about 18 m long, covered, clear creeks flowing curves over the Thu Bon River bordering Nguyen Thi Minh Khai street and Tran Phu street. This bridge is built by Japanese traders around the 17th century, it is also known as Japanese bridge. It is a beautiful example of the Japanese architecture from the time. At one end, there is a sculpture of dog and on the other end is a sculpture of a monkey. The two animals are sacred symbols in Japanese culture. The roof tiles covering the bridge. On the main door of the bridge is a large plate with embossed 3 Chinese characters “Lai Vien Kieu” means “The welcoming bridge”. Although it is called a Pagoda but there is no Buddha statue. Instead, there is a wooden statue of the northern god Tran Vo Bac De in the center of pagoda. – A protector of land, bringing the joy and happiness to people. The pagoda was renovated many times in 1817, 1865, 1915 and 1986 making it a hybrid of architectures of Vietnamese, Japanese and Chinese. With distinctive religious architecture, Bridge Pagoda is regarded as symbol of culture exchange between Vietnam-Japan in Hoi An. The bridge was built over 2 centuries ago and damaged many times by storms, floods and wars. However, after the bridge was destroyed, the villagers always contributed to repair, renovate and preserve it.

Next to the bridge is a village market, very convenient for tourists to enjoy delicious simple food after the sightseeing. Phat Diem covered bridge is situated about 30 km from Ninh Binh city at the center of Phat Diem town, Kim Son district. Crossing An river, it is not only for transportation, but also served as an ancient communal house and is familiar to all local people. Among tile-covered bridges in Vietnam, Phat Diem bridge is quite large with a total length of 36m and width of 3m, comprising three spans, each of which has 4 compartments. There are two banisters and pillars all made of wood. The two sides of the bridge are connected to stairs down to the river. Compared to Bridge Pagoda and Thanh Toan bridge, Phat Diem bridge looks more elegant, expressing special creativeness of Catholic. Although the wooden part of the bridge was carved simply, it shows the typical architectural structural style of the Vietnamese people, particularly through the arrangement of rows of pillars, the structure of beams and the technique of joining wood mortises. Like the Thanh Toan Tile-Roof Bridge in Hue and the Pagoda Bridge in Hoi An, the bridge of Luong Pagoda is one of the beautiful architectural works and typical ancient transport works remaining