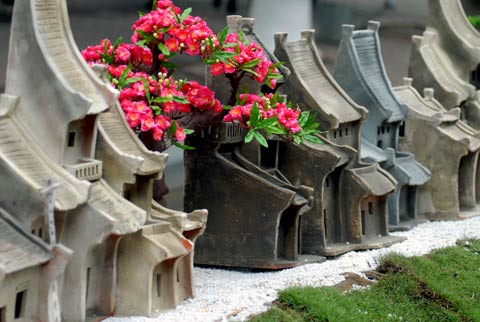 2. Lake of the Restored Sword The name “Hoan Kiem” (mean restore sword) is originated from a legend about Emperor Le Thai To. It was said that after victory over the Chinese Ming invaders, on a nice day, while the emperor was boating on the lake, a golden turtle came up out of the water to take back the sacred sword that had been given to him before to save the homeland. With 838 hectares, the West Lake is the largest natural lake in the centre of Hanoi. Geographically, the West Lake is a part of Red River. Historically, the lake appeared in several Vietnamese legends. According to a legend, this place was formerly a forest, surrounded by a mountain on which lived a 9 tailed fox spirit. It harmed many people and was then drowned to death by the Dragon King Lac Long Quan. The lake was formed by the battle and that’s why it was once called Dam Xac Cao (Fox Corpse Swamp). Meanwhile, another legend claims that the lake was constituted when a large Chinese buffalo mistakenly confused a temple bell with its mothers call and ran so fiercely into a small hollow. Temple of Literature was built in 1070 by Ly Thanh Tong and then reconstructed during the Tran dynasty to dedicate to Confucius. It is also the first university in Vietnam. It consists of five courtyards lined out in order. The first two courtyards are peaceful havens of ancient trees and well-trimmed lawns where the scholars could relax away from the bustle of the city outside the thick stone walls. Entrance to the third courtyard is through the dominating Khue Van Cac, a large pavilion built-in 1802. The third courtyard is where doctor names were listed on stone steles placed on tortoises’ back. There are a total of 82 stone steles, with names and origins of 1307 doctors, corresponding to 82 examination courses between 1442 and 1779. Located in Dong Anh District, Co Loa citadel was built in the 3rd century before Christian era under An Duong Vuong. According to legend, the citadel comprises 9 spirals but only 3 rounds of rampart still remain at present. The outer rampart covers perimeter of 8 km, the perimeter of middle rampart is 6.5 km and inside one is 1.65 km. Co Loa citadel include many historical relics and architectures such as An Duong Vuong temple, Ngu Trieu shrine, My Chau hermitage, Pearl well… Located in the center of Ba Dinh square, Ho Chi Minh Mausoleum is a large memorial to Ho Chi Minh President, Vietnamese great leaders ever. The architecture was inspired by Lenin’s Mausoleum in Moscow and made of precious materials collected from cities and provinces across the country in 1975. The embalmed body of Ho Chi Minh is preserved in the cooled, central hall of the mausoleum, which is protected by a military honor guard. The body lies in a glass case with dim lights .

One Pillar Pagoda was built in 1049 based on a dream of Emperor Ly Thai To. One night, he dreamt that he was granted a private audience to the Bodhisattva Avalokiteshvara, who was seated on a great lotus flower in a square-shaped lotus pond on the western side of Thang Long Citadel, gave the King a baby boy. The pagoda was built of wood on a single stone pillar and resembles a lotus blossom that makes it most unique. The stone pillar is 1.2 m in diameter and 4m high, excluding the underwater part. It consists of two blocks that are connected together and look like one. The pagoda’s roof is decorated with dragons flanking the moon. In the pagoda, the bodhisattva Avalokiteshvara is placed on a wooden and red-lacquered Buddha’s throne at the highest position.