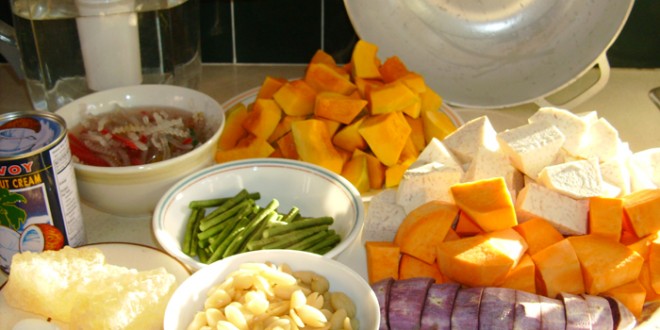 In South region, the Buddhists are in the habit of having a vegetarian meal in a pagoda on full moon days or death anniversary. The dishes are prepared and arranged beforehand on the table by the monks with an indispensable dish of Kiem soup. So, what is the history of the dish? Kiem soup is one of the few dishes given a specific name but not use “meat analogue” name like most of the other vegetarian dishes. The ingredients to make Kiem soup include pumpkin, sweet potatoes, string bean, peanuts, tofu, coconut cream, taro power. Kiem soup is usually eaten with rice or noodle. The dish was originated from a habit in the past when the Buddhists often offered food to the Buddha at pagodas and monasteries on full moon days or festivals. Someone contributed pumpkins, some other presented sweet potatoes or loofahs…Therefore, the monks combined these ingredients to process a dish for Buddhists. Kiem was derived from “tau thung” dish of Chinese people. “Tau thung” is a soup made from mung bean, sweet potato, tofu skin, Arenga pinnata starch. When settling down in Mekong River Delta, they got married to Vietnamese people and “tau thung” was gradually Vietnamized by adding coconut milk and became Kiem soup nowadays. However, no matter how it is, Kiem soup is always considered as a specific vegetarian dish of Southern people. It is coconut cream that makes the soup full of flavour and creates the soul of its. If you have a chance to go to the Western region, you will see that every house grows at least one coconut tree to make a cake or sweetened porridge. There is one thing for sure that Southern habitats are very interested in sweet food and kiem soup is so sweet that someone supposes that it is made for the native people only. Actually, kiem soup is the harmonious combination between sweet, salty and rich flavour. Besides, you can feel the buttery taste of sweet potato, crispy of peanut and tender of tofu.