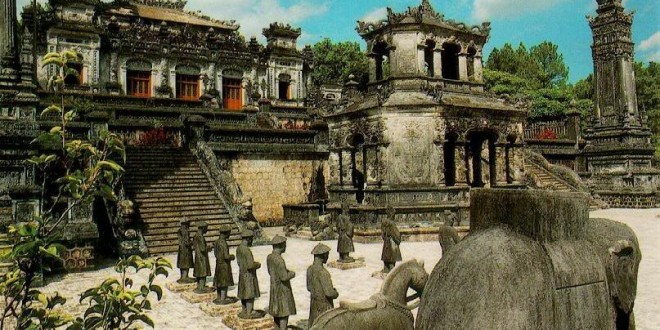 As you might know, Hue was the ancient capital of Vietnam for a long time. For this reason, this place possesses so many citadels and royal tombs. Today, I am happy to take you to royal tombs of Nguyen Kings in Hue. Nguyen kings’ tombs expresses unique variations in a united theme. Each tomb was a great achievement of scenery architecture and evoked visitors special feelings.

Take a tour of royal tombs in Hue, tourists will feel like wandering in a beautiful  park or immense forest and mountain, where they could hear the voice of birds, streams or wind from pine trees and watch colorful flowers blooming. Besides detailed images that people can enjoy through intuition, there are abstract and superhuman things that require thinking to conceive  and feel. This idea derived from conception of life of a historical period. Nguyens dynasty (1802-1945) has 13 kings. However, due to complex and different historical reason, Hue consists of only 7 royal tombs at present.

Many topical relics exposed that king was a god and represented by the sun. And the image of sunset displayed the death of a king. When a king was gone, he and the sun would go to the west, where situated the tranquil hills to rest in peace for ever. Most of mountains, streams, rives, vegetation in mountainous regions in Hue were utilized or modified for setting of the tomb’s architecture. The talented craftsmen exploited thoroughly space and natural surroundings, put them into architecture proactively, made them serve for intention of buildings’ author. At the same time, they applied architecture to the places where lack of nature to create the appropriate aesthetic.

The dominant factor of  the division of the two areas in planning Hue’s tomb and creating artistic architecture style came from the concept “sinh ky tu quy” of people at that time. This idea means that life in this world is temporary, the life after death is just the real world of human. Thus, each tomb was considered as a palace of the Nguyen kings in the world of afterlife, where they returned to their everlasting life. Owing to such conception about the life and death, the kings cared about building their tombs when they were alive. The architecture of the royal tombs also showed the wisdom and serene attitude towards the inevitable death to everybody. In summary, thanks to ideological theme originated from general conception of life of Oriental philosophy and excellent talent of Vietnamese architects, Hue’s royal tombs became a masterpiece of art and had unique features in comparison with other types of tomb architecture in the world. Every single royal tomb is not only a cultural and historical relic but also an attractive beauty spot for anyone travelling to Hue.