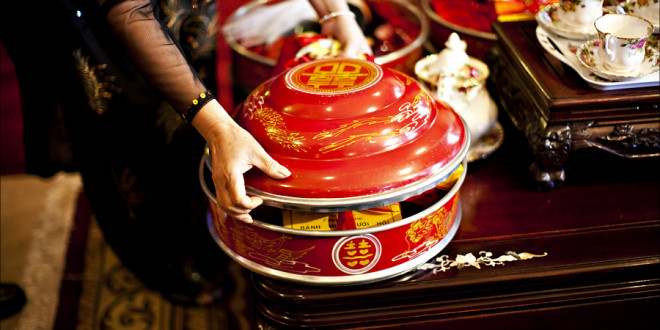 To the Vietnamese people, marriage is one of the most important events in a human lifetime. The ceremony has great significance not only to the couple involved but to both families and friends. 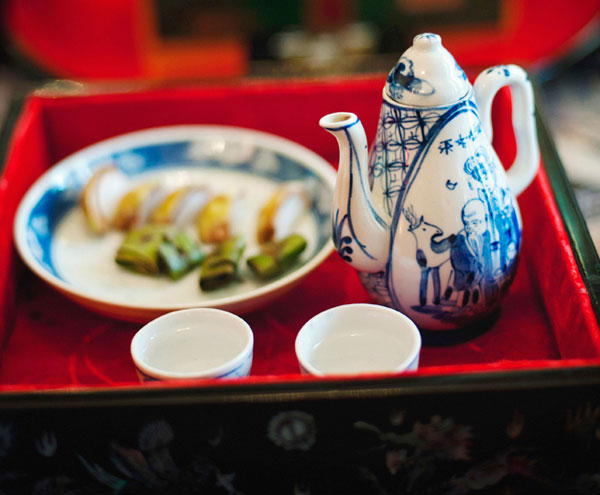 Both events can happen months beforehand. The betrothal ceremony is just as important as the wedding ceremony. Traditionally, both bride and groom or their parents go to the fortune-teller to see what date and time are best for the couple. Before the wedding day, the groom’s family would pay a visit to the bride’s home with a gift of betel nuts to officially ask permission to receive the bride. At this time, the bride’s family would confirm the wedding and further proceedings would take place.

In reality, this now obsolete ceremony was used in the past to confirm – last minutes – that the marriage would still take place. Due to often forced arranged marriages, some brides fled from home into the country. Thus, this ceremony was more so used to confirm that the wedding would proceed. You must ask permission or else you won’t be able to marry. If you ask, you will be welcomed with kind comfort, and a chance to receive your bride.

An engagement ceremony usually occurs months or half a year before the wedding. In the past, most marriages were arranged by the parents or extended family, and while children were sometimes consulted, it was nearly always the parents’ final decision. It was not allowed for the bride and the groom to meet for the first time on the day of their engagement. However, in the last few decades, Vietnamese women and men marry based on love rather than their parents’ opinions.

On the day of the wedding, the procession of the groom’s family is led in a specific order. The first person would be the representative of the groom’s house followed by the groom’s father, the groom, then the rest of his family and close friends.

In the past, the groom’s mother might not take part in the procession as a sign that she would not be a threat to the future bride; she would even “hide” for a short period upon the bride’s welcoming to the groom’s home. However, this practice has long been abandoned. The number of people participating in the groom’s procession varies but is usually restricted to a smaller number (20 or so) to make it easier on the bride’s family, which must receive all the guests. 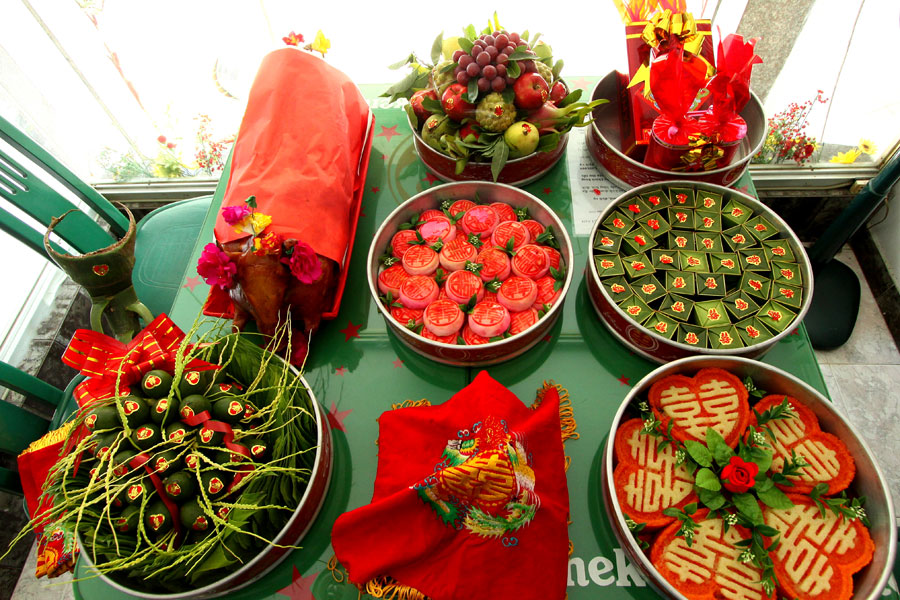 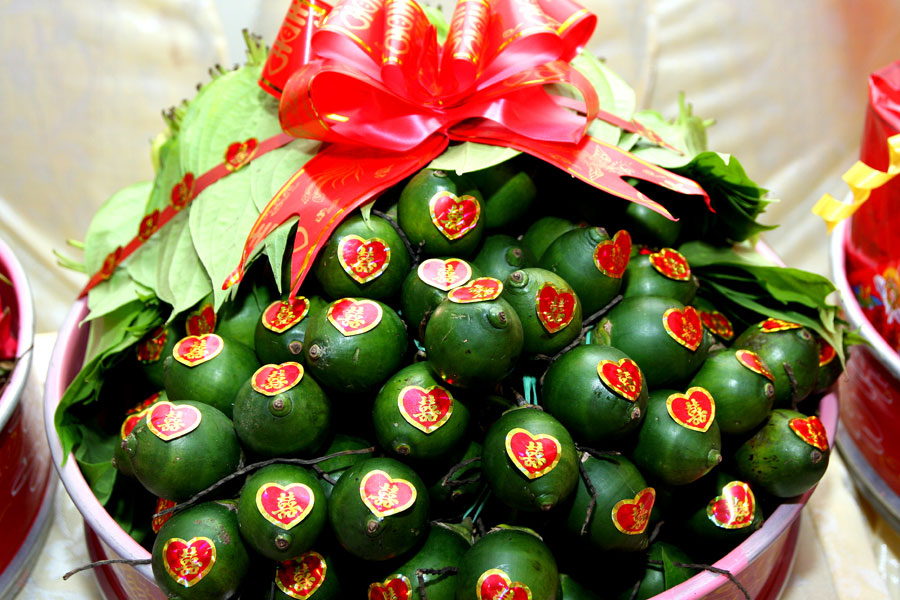 In the procession, the groom, his family and friends bear elaborately decorated lacquer boxes, enveloped in red cloth. Inside these boxes are gifts representing the wealth that the groom’s family will bring to the bride’s family. Gifts are betel, fruit, cakes, a roasted pig, fabric, and an abundance of jewellery for the bride. Usually, the number of gift boxes varies between from 4 to 8. However, it depends on the personal view and might be reduced to 2-3 boxes. The number must be an even number such as 4, 6, or 8 in South Vietnam and odd number often 5 or 7 in North Vietnam. The gifts are covered by the red coloured paper or cloth. In Vietnamese beliefs, the red colour will bring luck to the young couple.

The permission ceremony begins in front of the bride’s ancestor altar. The bride and groom burn incense sticks, wishing for blessings from the ancestors. The couple turns and bows to their parents, gives thanks for raising and protecting them. The bride and groom then bow to each other. 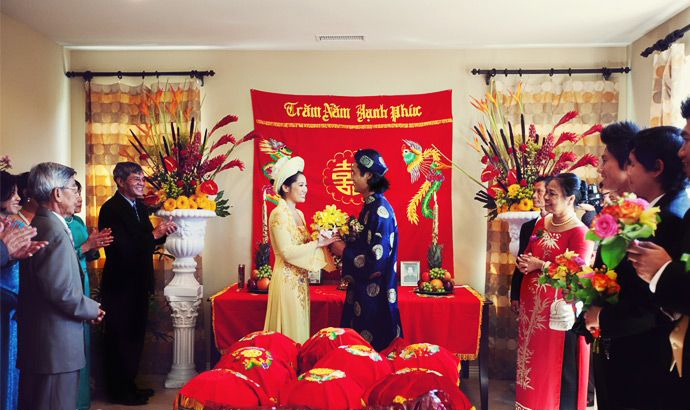 A formal tea and candle ceremony along with speeches follow. While tea has always been an essential part of Vietnamese life, Vietnamese tea culture is not as complex or ritually rigid as its counterparts in China, Japan or Korea. A traditional wedding may be the only time in a Vietnamese person’s life that a formal tea ceremony is essential.

The bride and groom, in front of all their guests, will turn to their parents. Each parent will then give advice about marriage and family to the couple. A candle ceremony will follow, symbolizing the joining of the bride and groom and the joining of the two families. The groom’s gift boxes filled with jewellery will be opened by the groom’s mother, who will then put each piece on the bride for good fortune.

Nowadays, however, the reception occurs immediately after the procession ceremony to the bride’s house and takes place at any desired location – such as either couple’s house, a restaurant or a hotel banquet hall. It is not until after the reception that the bride is brought to the groom’s house. The vast majority of newlyweds also have their own place. If so, they simply go to their house.

The number of guests in attendance at these modern-day receptions is large, usually in the hundreds. Elaborate 7 to 10-course meals are served, often starting with cold platters then followed by hot dishes such as seasoned lobster, seafood hot pot, and other Vietnamese and Chinese banquet dishes, often ending with dessert or a fruit platter.

This portion of the wedding ceremony is crucial in terms of uniting families and the couple. Other gifts include areca nuts and betel leaves for example. The areca nuts initiate the dialogue between the parents of both sides. Other important and symbolic gifts include wine, tea, pastries, sticky rice, fruits and most importantly a whole roasted suckling pig. 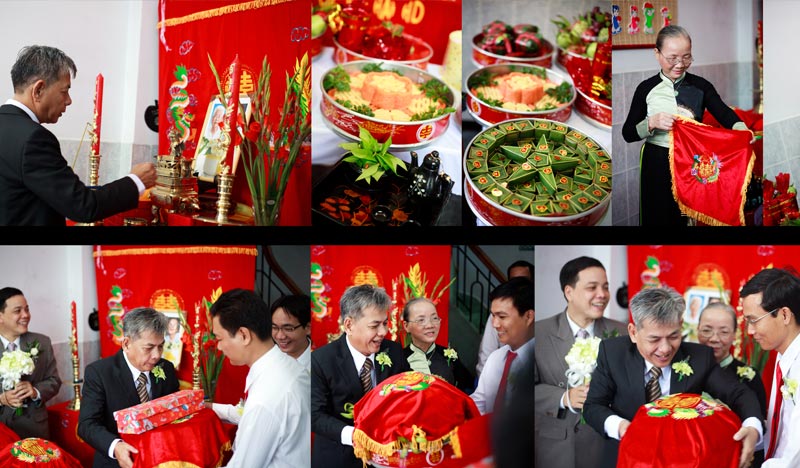 Traditional Vietnamese dress for both the bride and groom consists of the customary “Áo dài” which is a long silk tunic with split sides at the bottom over silk trousers. The bride adds an outer robe called an “ao choang” over the Áo dài on her wedding day, and her entire outfit will be red or pink for good luck and trimmed in gold embroidery. The bride also wears a cone-shaped hat known as “non la” or a saucer-shaped headpiece called “khanh vanh”. Traditionally, the Vietnamese groom also wears formal silk Áo dài. 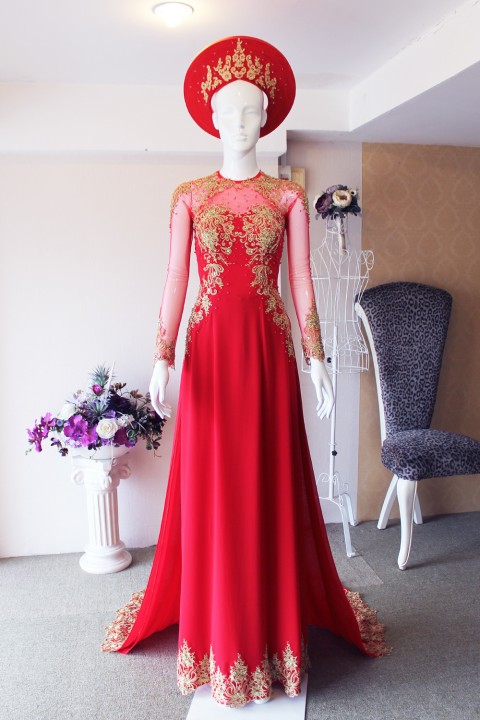 In modern weddings, brides usually change into three different gowns during the reception. Her dresses usually comprise the Western white wedding gown, a second Western dress to be worn at the end of the evening during the dancing and a third traditional Áodài to be worn during the traditional table visits to personally thank the guests for coming.