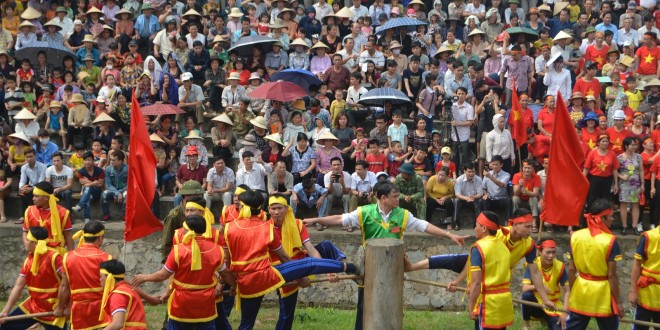 Along with the rapid development of urbanization and the invasion of Western culture is the disappearance of traditional villages and rice fields in Vietnam where people had nurtured and enriched the distinctive agriculture culture for thousands of years. Nowadays, we can only see the traditional games in some festivals and sadly, most of the kids do not even know the names of this used-to-be very familiar, healthy and exciting entertainments. This article will show you what and how Vietnamese people play in the past. 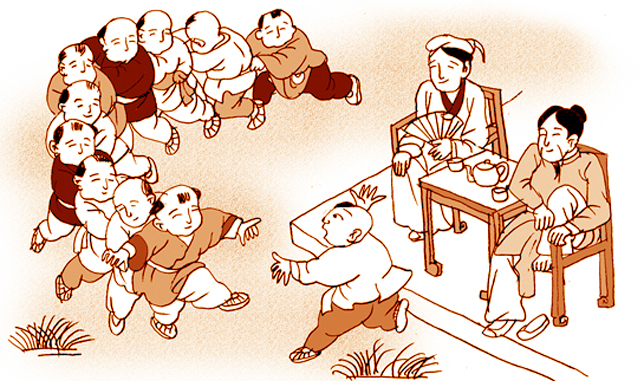 Every child used to play this game a lot. It’s fun and makes you run a lot.  There is a doctor who chases after the tail of dragon-snake after the dialogue between him and the head of the line:

The dialogue continues until the dragon-snake says:

Then the doctor answers:

With this, the doctor stands up and says: 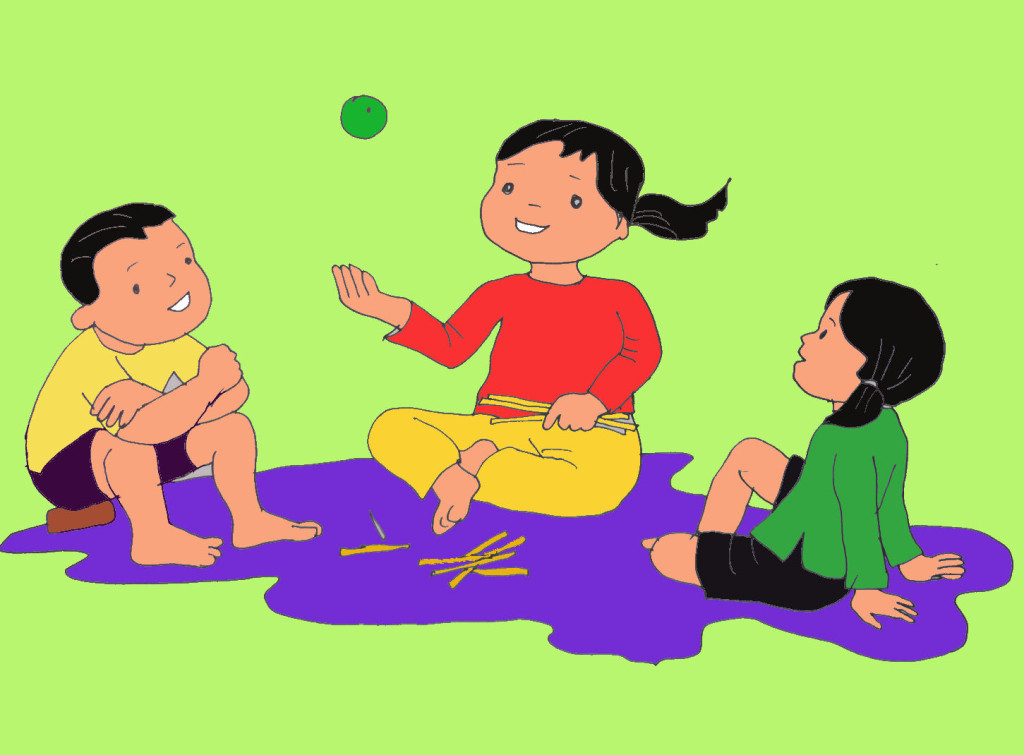 One of the “girls’ games” which challenge the dexterity and quickness of the hands to catch the right number of the bamboo sticks from 2 up to 10 between each toss of a ball (a fig was used a lot but now tennis ball is more convenient) into the air. Players often recite a singsong nonsense rhyme: “Cai mot… Cai mai… Cai co… So mang… Thang chang… Con chit… Ngam nga… Ngam nguyt… Chuot chit… Sang ban doi…” during the play.

In the first round, the player picks up the slicks one by one. Next, she gathers two sticks at a time, and so forth up to ten. In these stages, she plays with only one hand. The girl picks up sticks and catches the ball while reciting the rhyme. The peak of the game is the last, the most animated stage with all ten sticks in a bundle. During this stage, the player losses the ball and then transfers (chuyen) the pack of sticks from one hand to the other. She must successively switch the bundle, first once, then twice, then three or even more times before catching the ball. 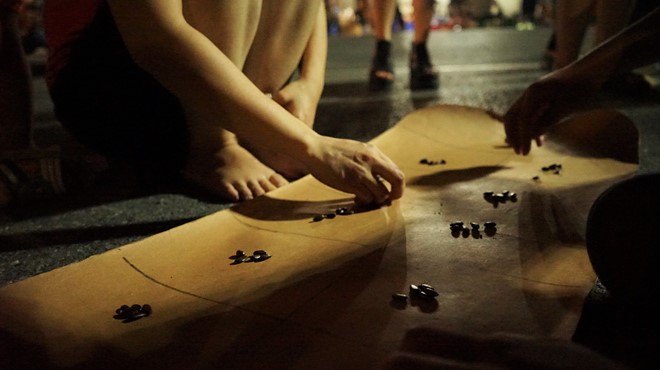 Like Rong Ran Len May or Chuyen, O An Quan (literally “Mandarin Box”) is also a very popular game which was played by everyone. This 2-person-game is played on a rectangle on the ground which is divided into ten small squares called “rice fields” or “fish ponds”.

There are two more semi-circles drawn at the ends of the rectangle which are called “mandarin boxes”. Each player has 25 small pebbles and big stone in which 50 smaller pebbles represent the peasants and only 2 mandarins represented by bigger stones. Each square has 5 pebbles while the stones are placed in the semi-circles.

The game begins with the first player (decided by rock-paper-scissors) take up the pebbles in one square of her/his side to contribute the pebbles one by one starting with the next square of the direction (left/right). The player can take all the pebbles inside one square that is next to an empty square as captives; lose a turn if 2 consecutive empty squares or the square followed to an empty square is a Mandarin Box. Turn is handed to other players once a player takes the pebbles of one square. If all five squares of one player are emptied, he/she must place one captive pebble per square to continue playing. The game ends when there are no more mandarins on the board. The winner is the one that has more captives. 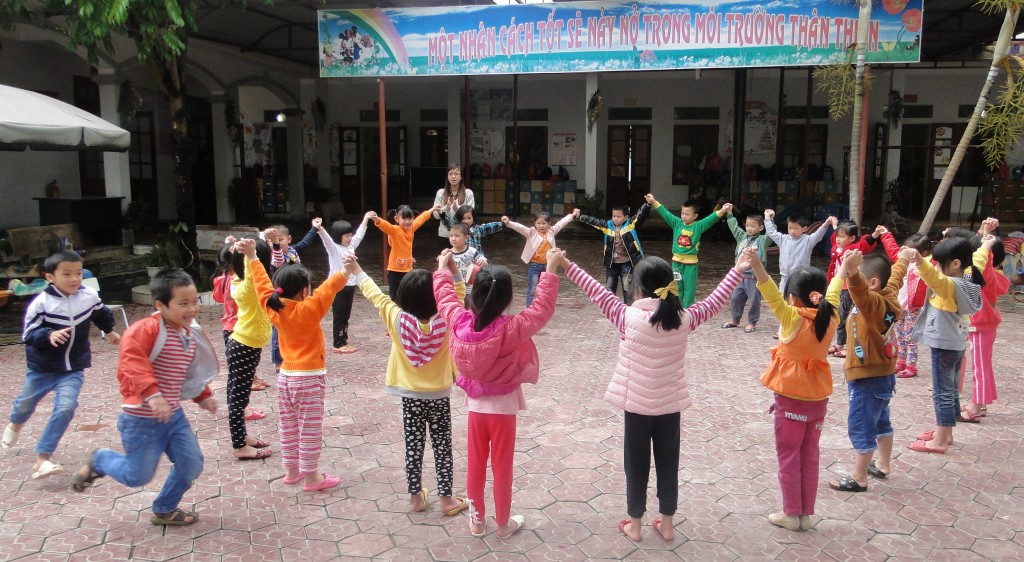 This is another group game that requires seven to ten players. Beside two players chosen as cat and mouse, the others stand in a circle, hold hands and raise their hands above head. The game starts by singing this song:

Stand in a large circle

The mouse will run through the hole

The cat will run after it

The mouse tries to run as fast as possible

But it can’t escape

Then the mouse will act as the cat and chase the cat, which is now the mouse”

The cat and the mouse stand inside the circle backs against each other. The mouse starts to run once the song starts, and then the cat will chase the mouse. However, the cat must run in exactly the same route and manner as the mouse. The cat wins the game when it catches the mouse. Then the two exchange roles. If the cat runs into the wrong hole, it will be dismissed from that round.

If the cat fails to catch the mouse in a certain period of time, the two will exchange role with each other. The game will then continue. 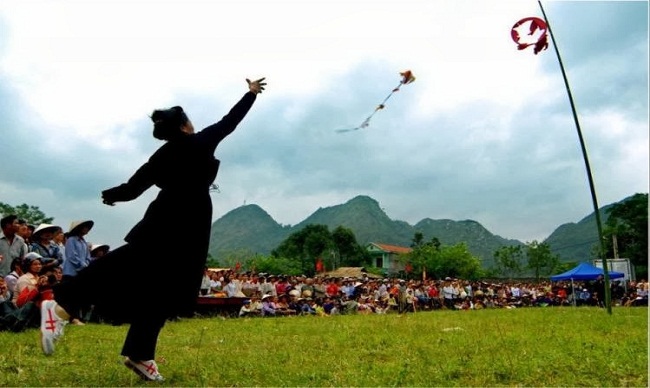 This game is often played in Tet festivals of ethnic minorities such as Thai, Tay, Muong, H’Mong…. With the meaning of getting rid of sadness and unluckiness, to bring new happiness and prosperity, the game is always an important part of an ethnic festival.

According to Tay legend, Pia, an orphan, was poor and lonely. Discouraged with life, he went to the forest and gathered pieces of fruit to throw around. One time, he threw a fruit so high and it flew straight to heaven, where a fairy caught it. The fairy came down to the earth to play with Pia. In the end, they fell in love and became husband and wife. To celebrate this story, young men and women toss balls (qua con) each year from the third day of Tet until the end of the first lunar month.

On a flat and vast field, an apricot wood pole 8-15m high will be placed. On top of the pole, there is a ring about 30-40cm in diameter, wrapped by paper. While the people stand on the ground with the “con” balls which are carefully made and decorated will try to throw them high through the ring for good luck.