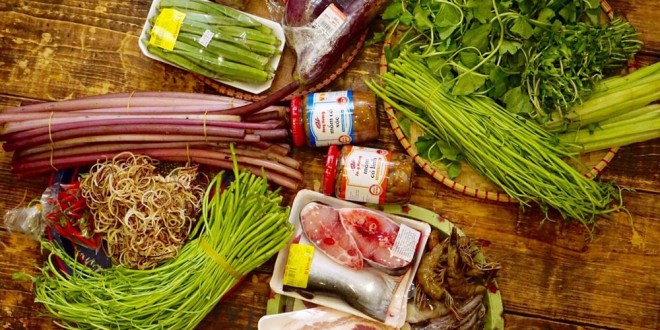 4 Hot-pot Dishes from The Mekong Delta

Thanks to nice treat from nature, farmers in Vietnam’s Mekong Delta are granted a widely varied range of special food. Combing the natural ingredients, locals have created tasty and delicious dishes that can be found elsewhere. Tourists coming there in water rising season can have chance to experience the dishes such as a hot pot of linh fish served with dien dien flowers, grilled ro or loc fish wrapped in young lotus leaf, etc…Following are some hot pot which are very popular and typical dishes from the Mekong Delta region in Vietnam. 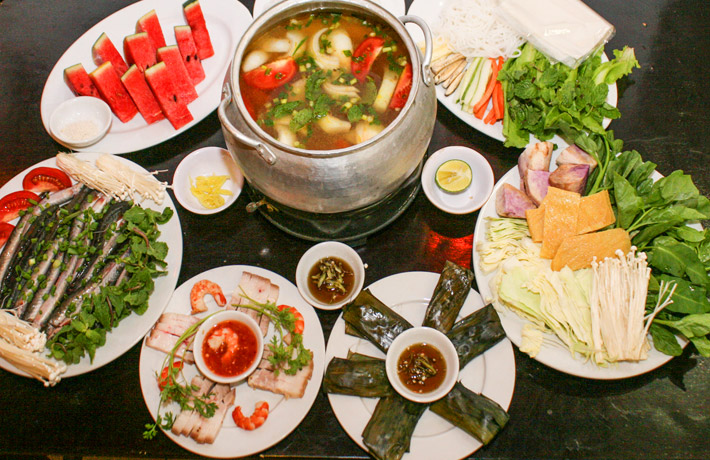 Take a sweet tasty fish, and then add some sour and bitter herbs, presto to make Lau ca keo (spiny goby hot pot). All of these combine to make typical southern dishes. The main ingredient is the spiny goby that lives only in brackish waters, particularly in the Mekong Delta and can grow to around 15 centimetres with a thickness of a thumb. Its meat tastes really delicious and smells good. This fish is generally eaten whole.  It may be grilled or fried though the most popular use is for a hot pot soup named after the fish. The soup is served in many restaurants in Vietnam where the fish is kept alive before putting into the pot. When the dish is ordered, the fish is brought to a boil, and the soup is eaten when it comes back to a boil again.

Making the sour hot pot with la giang (sour- soup leaf) turns out to be good for the dish. The fish makes the soup opaque and thick while the leaves infuse a little green with a gentle sourness. While enjoying the hot pot, a big attraction is the scent of the herbs and vegetables that goes along with. A sour hot pot requires a lot of seasoning like cilantro, basil and rice paddy herb which are chopped into small pieces. In the end, the sour soup becomes more appetizing by adding some rice vermicelli and fish sauce. The fish then is dipped into fish sauce containing a few thin slices of chilli. 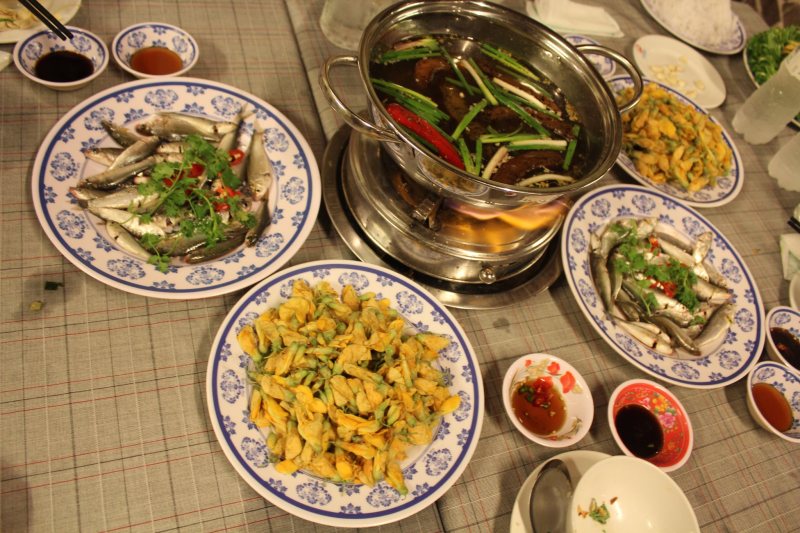 The most important ingredient to make the hotpot is linh fish that is required to be clean, fresh and fatty. The linh fish is a small delicacy that can only be caught in the area during flooding season. After soaked in species for a while, the fish with dien dien flowers that have not bloomed fully will be put into the hot pot sauce. The sauce is prepared in advance in different ways: pig bones or fish skeleton that are well- cooked for a long time or coconut added with sour flavour from “me” fruit. It takes a short time for the sauce to boil again at which you can add more different vegetables. It’s unforgettable to taste a terra- cotta bowl of crispy linh fish, dipping it in sweet and sour tamarind sauce. The sauce is served with white noodles or rice. 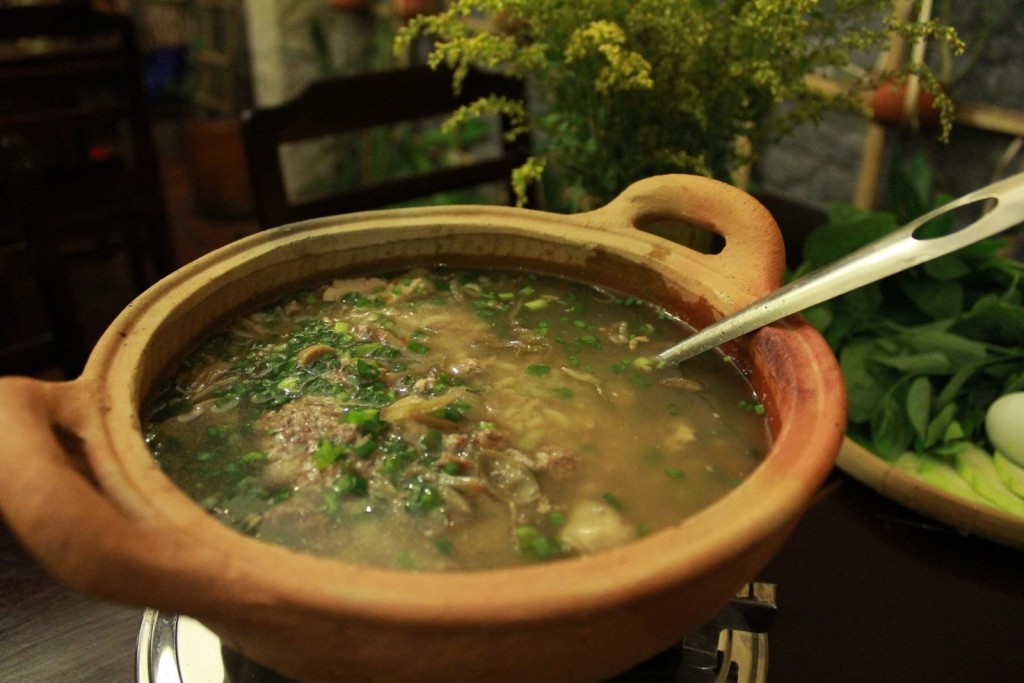 Freshwater crab hot pot is an appetizing dish not only in northern Vietnam but also beloved in the south. To make a genuine tasty broth, the crabs require most fresh and clean freshwater crabs. The meat of the crabs when cooked in hot water will take shapes and becomes large pieces of meat. The dish has many different flavours to enjoy: the sweet taste of crab meat, the buttery taste of crab- roe, the sour taste of tomatoes and tamarind. It also has the savoury flavour of dill, water spinach and crab cake. You can add some other ingredients into the hot pot to feed your appetites such as flower crab, squid, shrimp, clam or other kinds of vegetables. The hot pot’s broth must be plentiful to make sure there is enough soup water for adding extra vegetables. It is usually to serve freshwater crab hot pot with noodles or rice vermicelli threads. 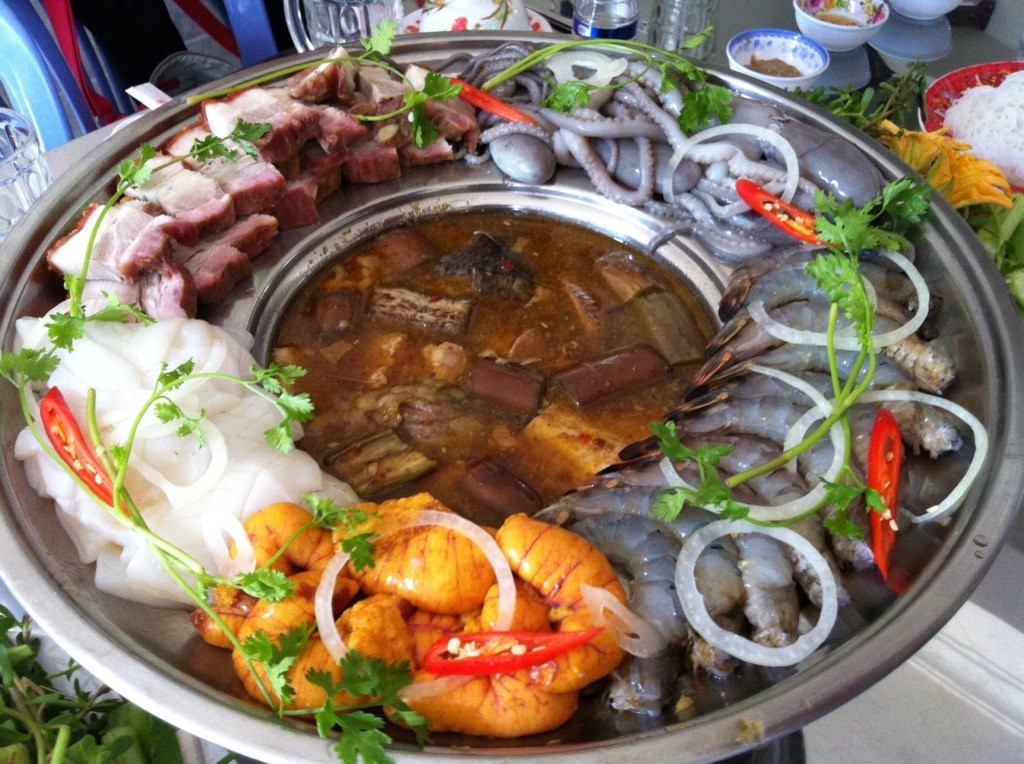 It has become a luxurious speciality in the South and an amazing combination of preserved fish and hot pot as well. Guests are certain to fall in love at first sight due to its eye-catching beauty of large dishes of colourful vegetables. The favour of the soup is made mainly from salted fish that is cooked until its meat and bone are separated, fatty and sweet-smelling.

The soup is seasoned with sugar, spices; a little of coconut milk added makes the hot pot tastier. Red chilli is also added to create more a fragrant taste. Substances to prepare for Lau mam include fresh fish meat, water crab meat, snails, eel, slices of pork, and silver shrimp are accompanied with various kinds of vegetables such as eggplant, bitter melon, water dropwort, dien dien flowers, water Lilly, straw mushrooms that will be dipped into the boiled sauce until well- done.  That is the reason why “lau mam” is considered as the ideal dish for vegetable lovers. The dish is scooped into bowls and served with soft noodle soup.