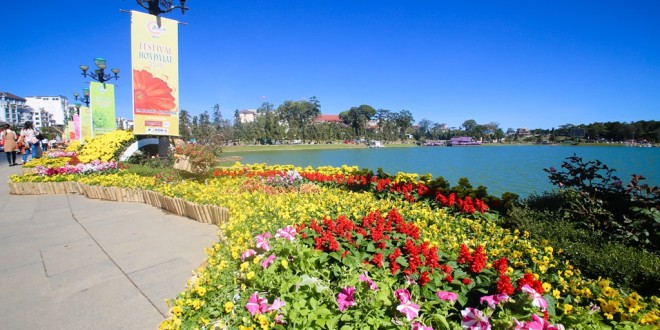 Hello guys, I’m Hien Giercke from Vietnam Visa Easy. I just came back from the trip to Da Lat, the most beautiful and romantic city of Vietnam. I’m so excited to share with you how beautiful the city is. Let’s check out the footage I recorded during the trip of the four unique places you shouldn’t miss in Da Lat.

If you come to Da Lat city at the middle of the day and still being hesitated about which spots outside the city to go, then Da Lat city’s flowers garden might be a good choice as it is right next to Xuan Huong lake – the heart of the city that it might take you no time to get there.

You can recognize the place by the sight of the gate being decorated with various types of fresh flowers. This garden covers 11 hectares including more than 300 strange and enchanting beautiful flowers, thanks to the cooler mountain climate.

The flowerbeds covering the whole area outside and inside the greenhouses are roses, daisy, lavenders, banana flowers, and of course hydrangeas as this flowers not only grow a lot inside the garden but also on the street around the city too. There are also some types of orchids which are said to be difficult to grow and last in a tropical country like Vietnam.

Coming to the garden seems like getting lost in some romantic fairy tale story when all the sceneries just go so well with each other like a well-painted colourful artwork. Sitting relaxed on a random bench in the garden, feeling the nice breeze bringing with it the aroma of nature, and watching the white floating clouds on the blue sky definitely made me become a day-dreamer, somehow forgetting about the busy lives out there for a while.

Truc Lam is one of the three largest monasteries in Vietnam. Located on Mount Phoenix, about 5 kilometres away from the city centre and surrounded by Tuyen Lam lake – one of the biggest lake in Da Lat – the place is even more peaceful.

The architecture of the Monasteries is quite typically Asian style. That can be proved by the curved edge of the roof, Buddhism’s belief of re carnation symbol as the wheel on top of the gate or main building.

Entering the main hall, you can easily see a big statue of sitting Buddha with the right hand holding lotus flower which means “sealing state minor”. This is also the place for Buddhism followers to come and pray.

Lives of the monks and nuns here are as quiet as the place itself. The bell rings from early morning to death night, reading scriptures and vegetarian meals. At the largest, with thousands Truc Lam Zen Monastery monks, Buddhists come to learn about Meditation, normally during the summers. Meditation Institute has more than 100 monks and laypeople from all concentrated in the country, according to the daily prayers a serious cultivation mode engraved with the philosophical perspective: “return to illuminate yourself”.

I am on my way to the next place I want to show you guys. That is Linh Phuoc pagoda. The place locates in the 8 km away to the northeast of the city. You can either drive or take a train there. And I prefer driving as it is also a good way to enjoy the natural beauty of Da Lat.

The pagoda was built from debris glass pottery bowls and porcelain between 1949 and 1952.

The front of the pagoda is lined with meticulously sculptured pillars in the shape of flying dragons. A 4.8-meter-tall statue of the Buddha is a striking work of art which sits between 12 glaze works in relief which respectfully illustrate the legend of the Buddha.

The second floor of the tower holds the largest bell in Central Vietnam, named Dai Hong Chung. The bell, 4.30 meters in height and 8,500 kilograms in weight, is carved in meticulous detail. This is also the place where people write down their wishes in a piece of paper and stick it to the bell, hoping that their wishes will come true.

Now let’s have more look at the marvellous artwork of this pagoda.

There are certain numbers of waterfalls in Lam Dong province due to its ups and downs landscape.  And it is such a pity if you come here but visiting at least one of them.

Now I am taking you guys to Datanla waterfall.

Part of the thing I like it here is that you can get down to the waterfall area by getting on the roller coaster, watching the scenery and maybe “screaming”.

There are several activities here other than taking the roller coaster such as getting on the cable car to explore more paths leading to other waterfalls or getting on the elevator to get as high as it takes you to have a good view of the whole area. Or just as simple as staying around the waterfall to hear the watering streaming, cool climate and enjoy the beautiful nature.

It is time to say goodbye now. I hope you guys will have a wonderful time when travelling to Da Lat city. Thanks for watching and see you again in the next episode from Vietnam Visa Easy.