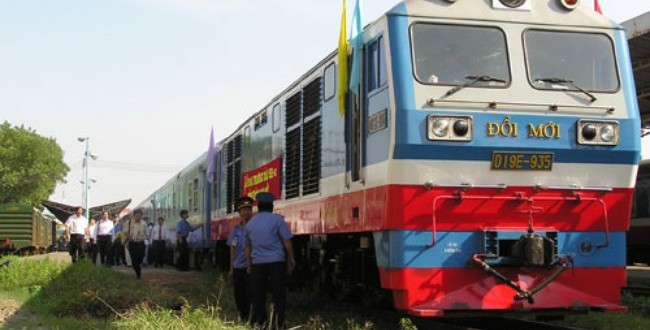 How to Take The Train in Vietnam

We already covered the reasons why you should travel by train in Vietnam, and in this blog, we’ll explain to you how exactly to do that! We’ll give you some explanation about the railway system and some helpful insights on how to book and travel in the easiest and cheapest way possible.

First things first, a little bit of historic background of the Vietnamese railway:

The Vietnamese railway system was established by the French when Vietnam was still part of the French Indochina colonies with the main route, the North-South line, connecting Hanoi and Ho Chi Minh City, being operated for the first time in 1936. This line has also been called the Reunification Express even though no train actually carries that name, but it rather refers to the moment when the war was over the government rebuild the connection between both North and South Vietnam. Since the construction almost a century ago, the railway system hasn’t undergone a lot of innovative renovations, except for the parts destroyed by the war being repaired. However, since the 1990’s the Vietnamese government has taken an interest in the railways and tries to improve the railway accordingly. In 2019, the government will vote for a plan to build a high-speed line between Hanoi and Ho Chi Minh City which should reduce the current travel time of 30 hours to 7 hours.

The railway system is mostly operated by the state-owned Vietnam Railways (Vietnamese: Đường sắt Việt Nam) but sometimes private owned cabins are connected to some cars too. The private-owned cars are run by Livitrans, Violette Train and Saigon Golden Train, but are obviously more expensive than the public one.

It is not always necessary to book in advance, but if you know your schedule it is cheaper to book and you have more options seat wise. If you don’t mind where you are seated and if you are in Vietnam during the low season, it is possible to go to the ticket office at the station just a couple hours in advance. However, if you want to plan your itinerary a bit more, we suggest booking in advance!

There are many tour companies out there pretending to be the official website of the Vietnam Railways, but be aware that there is only one official informational website and one official booking website. Websites such as vietnam-railway.com or www.vietnamrailways.net or vietnamrailwaycorp.com are private businesses and operate as middleman selling tickets to tourists.

While it is possible to book through the official website of Vietnam Railways, we don’t recommend you booking with them however because they do not accept foreign credit cards. If you don’t mind going all the way to the station you can choose the pay later option and pay in cash at the station. It is helpful to check out the booking website because you can see and pick the seats which are still available and check the exact rates.

Another valid option is booking through the online companies baolau.com or 12go.asia . Since shortly, baolau.com offers the seat picking too which runs fairly up to date with the official website. They add a small service charge to the end bill though.

When booking, please bear in mind there are several classes and options:

For a longer overnight trip, it’s recommended taking a bed. If you don’t mind sharing your cabin with a lot of people, you can opt for the hard sleeper, with the cheapest bunks the highest ones and the most expensive ones the bottom ones. The highest ones are not very comfortable as you cannot sit straight and are obliged to lie down for the whole duration of the ride, so bear that in mind while booking. The 4 berth sleeper is supposed to be a bit larger which means it is more comfortable for tall people.

The trains run fairly on time, but it is recommended to be at the station at a bit before, so you can get installed easily. To board the train you have to show your ticket to the train attendees. Once on the train you can get acquainted with your fellow cabin users. The new cars have modern toilets and there is toilet paper, but that might run out, so bring your own. Also some tickets include a meal, but you are able to buy snacks and beverages from the train attendants too. If you are picky, we suggest bringing your own snacks and drinks. Once on the train, just sit back, relax and enjoy the scenery. If you are travelling between Hue and Da Nang you can see the marvellous Hai Van Pass and the coastline.

We hope you are able to enjoy Vietnam in all its beauty when travelling by train.

Recently, we have received so many emails questioning about the visa extension in Vietnam due …