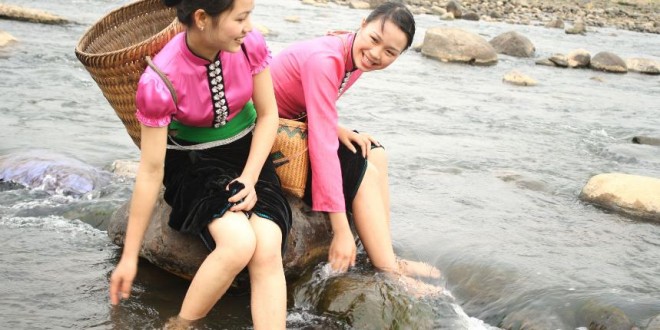 Thai people came from Southern China. They have the same origin as ethnic minorities such as Choang, Tay, Nung. Under the pressure of Chinese and Vietnamese in the east and north, they migrated to the South and Southwest. The Thai people entered Vietnam from the 7th to the 13th century. Normally, after the wedding, the groom will live in the bride’s house for several years until a baby is born, they will move to the groom’s house. However, this custom is not so as popular as in the past. The Thai think that there is a world after death. Therefore, they hold a farewell party in a funeral to see off the dead.

Culture
The Thai language was originated from Tai-Kadai languages. In Vietnam, 8 ethnic minority groups including Bo Y, Giay, Lao, Lu, Nung, San Chay, Tay use Thai. Myths, legends, folk tales, folk poetry are a valuable asset of Thai traditional culture. They like singing, particularly “khap tay” (reciting poetry with the chime of string instruments and dances Their folk dances such as “Xoe”, “Sap”, “Han Khuong” were performed at many domestic and international stages that allured so many people. “Han Khuong” and “Nem Con” (a folk game) are a reflection of the Thai’s unique cultural characteristics.