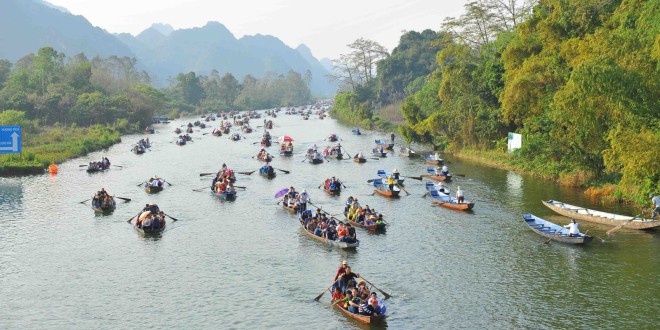 Festivals Held in the Second Month of Lunar Year

After Lunar New Year or Tet, Vietnamese people spend the whole second month of the lunar year to hold many traditional festivals across the country.

All of the festivals are the special occasions for the people to send wishes for a new good year to come, for safety and health as well as remembering the heroes and heroines in the past. 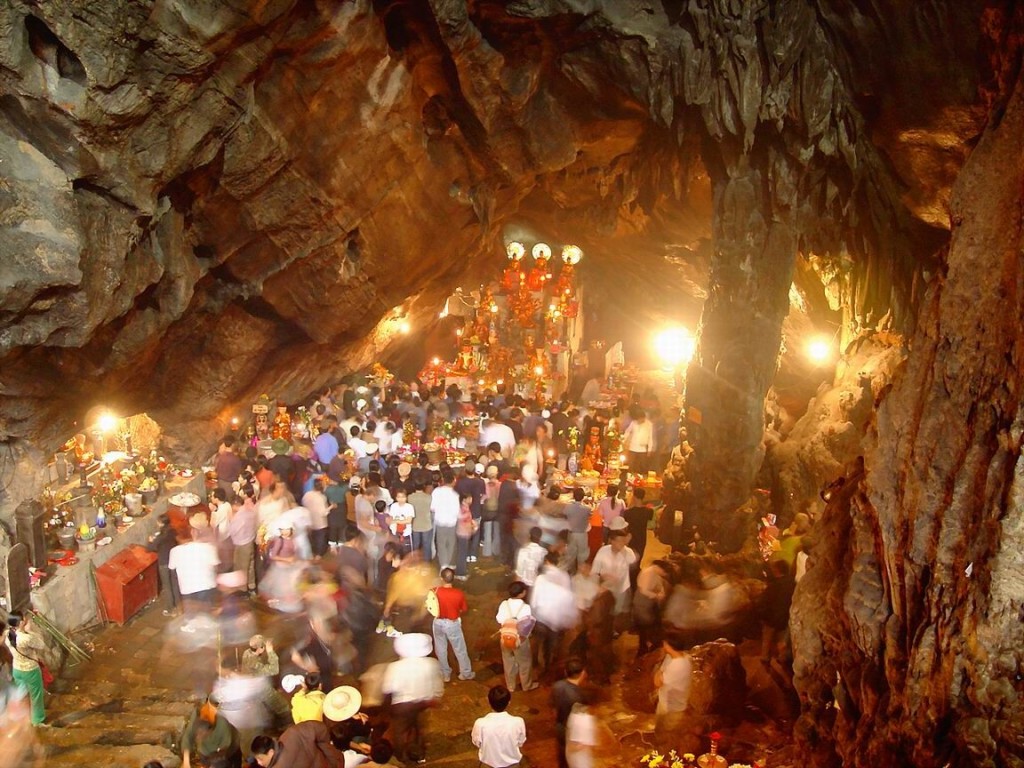 It’s not wrong to claim that Huong pagoda festival is one of the largest traditional festivals in Vietnam. Officially begins from the 6th day of the first month, the festival lasts for a time of three months. The peak period is from first full moon of the year to 18th day of 2nd month with the overflowing thousands of pilgrims visiting each day.

Huong pagoda is an important tourist site because of not only its religious and cultural values but also of the magnificent natural beauties. Huong Tich cave was long ago crowned as the most beautiful cave of Vietnam. Huong pagoda also witnessed the development of Buddhism in Vietnam throughout history.

There are two buses from Hanoi to Huong Pagoda: no.75 from Yen Nghia bus station and no.78 from My Dinh bus station. If your itinerary is limited within one day, you should visit all the three main sites: Trinh Temple, Thien Tru Pagoda and Huong Tich cave. 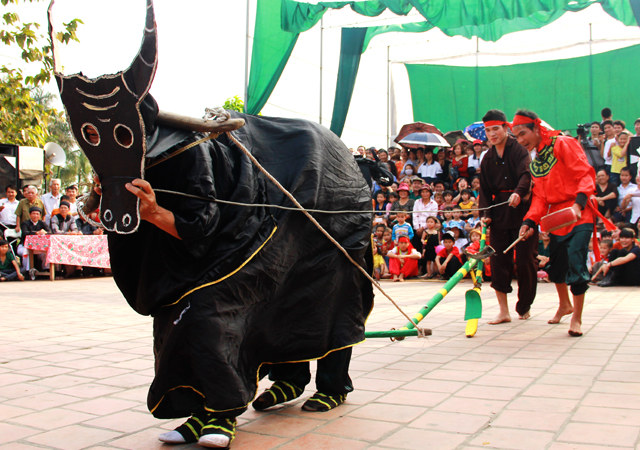 According to legend, the female general Le Thi Hoa once joined the resistance against Nam Han invaders, led by Trung sisters. After the war, she returned to her homeland indulging the work of a farmer. To remember her, Duong Yen villagers annually hold a groom-choosing festival on 2nd day of 2nd month remaking the competition to choose the right husband for the female general. The contestant will have to show their talents in poem citation, self-introduction, skills on farming work and even in making the dogs bark. 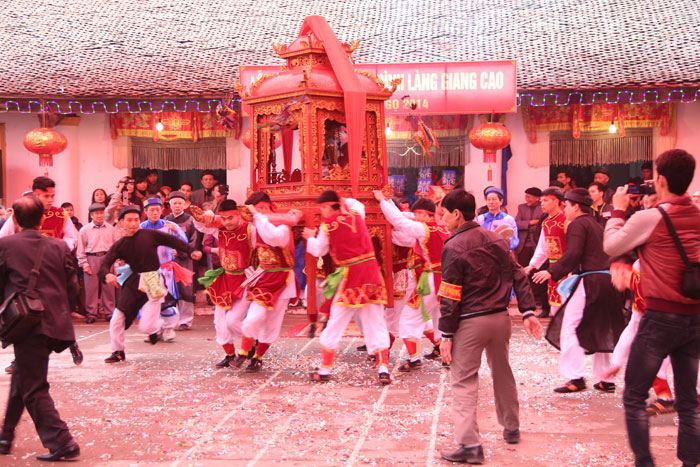 Bat Trang festival is held on 14th, 15th and 16th days of the 2nd month of the lunar year. The festival is dedicated to the pottery crafts. This is the occasion the villagers, the craftsmen to send their gratitude to the ancestors, the tutelary deities and wish for a more prosperous and happier life.

Come to Bat Trang village in its festive days, visitors have chance to enjoy the traditional ceremonies of a typical Vietnamese traditional village festival and after that, the exciting games such as Chinese chess contest, human chess, tug-of-war, etc. Do not forget to visit the pottery market for the finest Bat Trang pottery and ceramics. 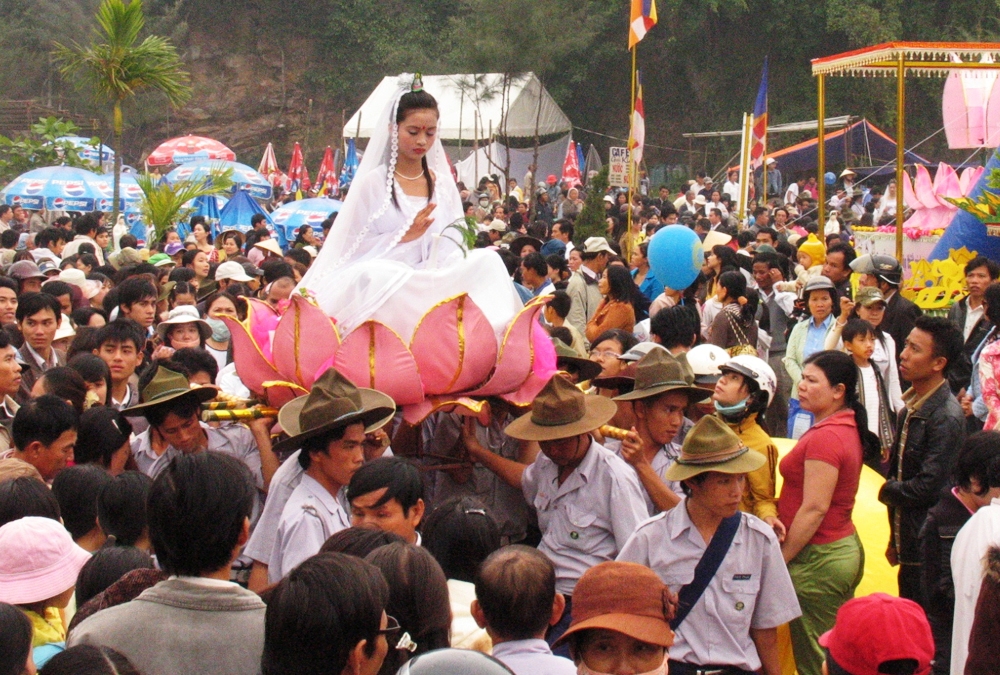 Bodhisattva Festival is the biggest traditional festival in Danang. The big event is held from the 17th to 19th of the 2nd month of the lunar year. Thousands of Buddhism enthusiasts and visitors across the country come to gather at the Marble Mountain, Da Nang to join the solemn yet exciting parade and ritual of the festival. This is the occasion for people to wish for a new year full of fortune, safety and opportunities. 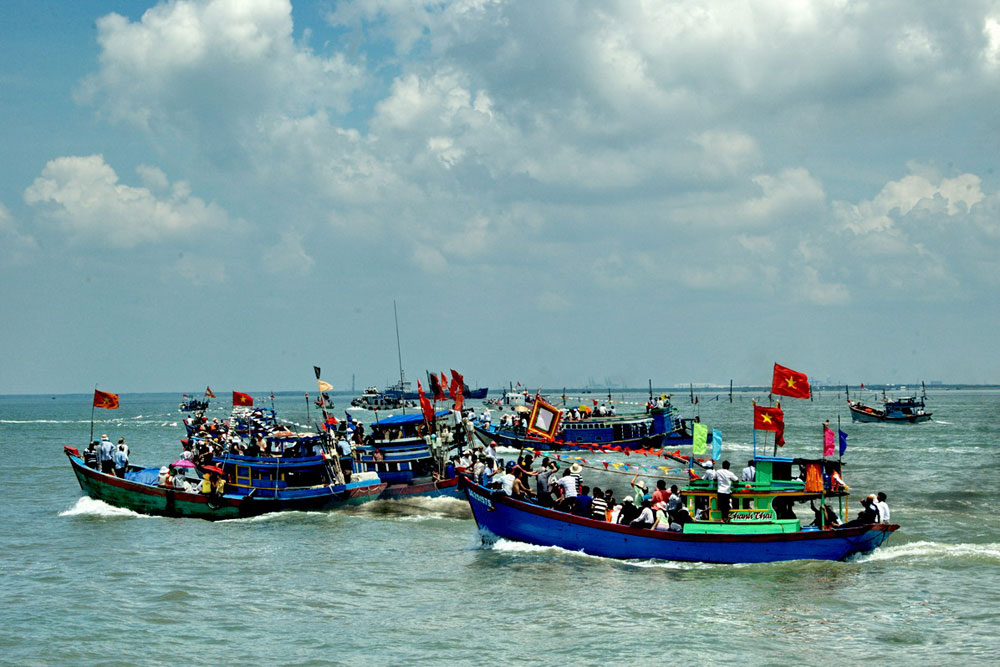 This is one of the biggest festivals of the coastal residents in South Vietnam. Nghinh Co festival makes a unique combination between the fish and whale worshipping culture and mother and goddess worshipping practice.

The goddess who is worshipped here is Le Thi Hong Thuy, a fisherwoman came from Phan Rang. On 12th day of 2nd month of an unknown year, Le Thi Hong Thuy fell off the boat and went missing. Three days after, her body drifted to Vung Tau’s coast and people of Long Hai town held a small burial ceremony for her and believed she would always protect the people of Long Hai.

The festivals in central Vietnam are so special because there are almost always boat races included. On the second day’s morning, a boat race and swimming contest will be held promising the most vital scene of the town. 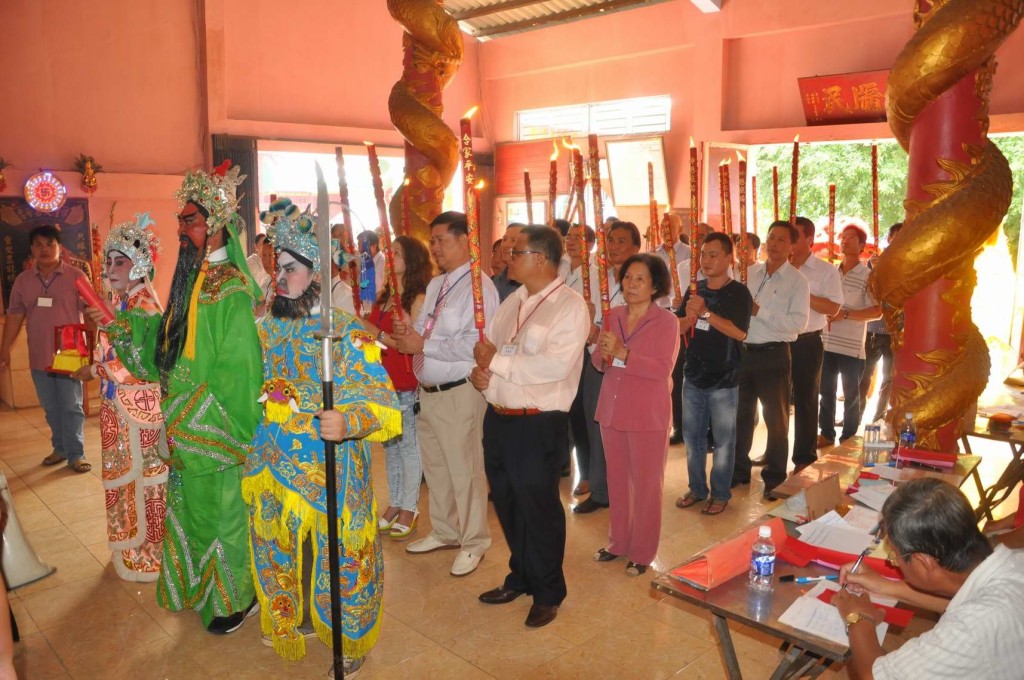 The festival is held at Ong Dia temple (125 Le Loi Str., Go Vap Dis., Ho Chi Minh City) on the 2nd day of the 2nd month. Ong Dia (God of Land) was built in the early 19th century and ordained in 1852 by King Tu Duc. This festival represents the kind of “temple festival” which is very typical and popular in Ho Chi Minh City. The event is filled with many remarkable rituals and a special “Tuong” – a southern folk oratorio – performance called “Dia Nang” telling a story between the god of the land and a fairy to criticize the toxic way of life existed in the past. There are also many more performances we can name as gold and silver plates dancing and lastly giving out amulets to people. 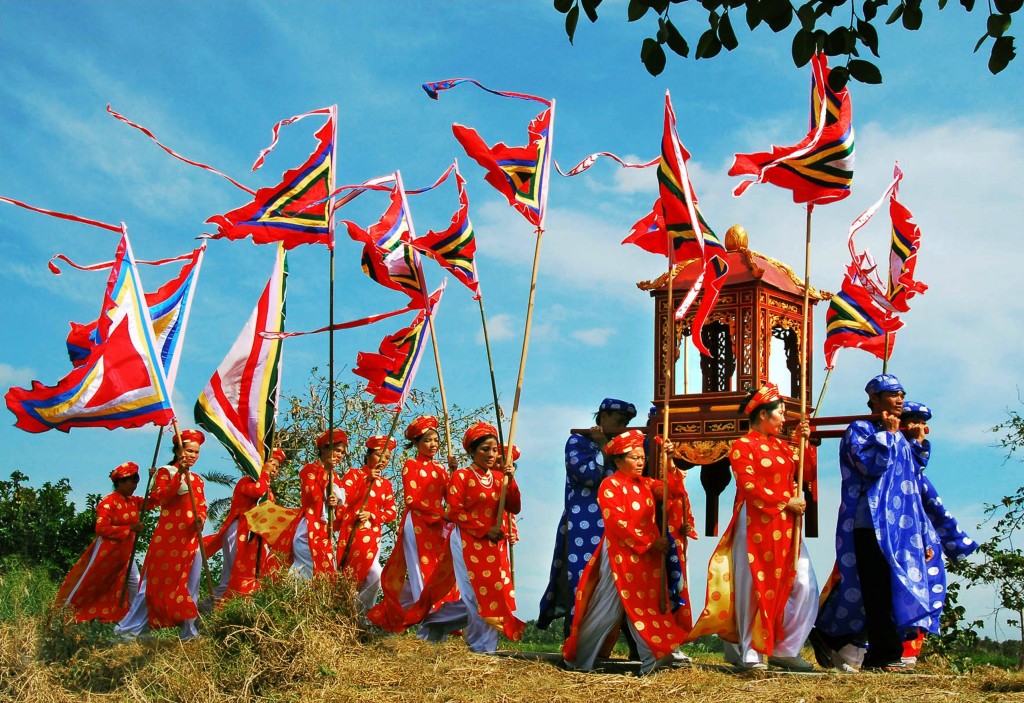 Held from 10th to 14th of 2nd month of the lunar year, Binh Dong Temple is placed on the side of Ba Tang channel, Dis. 8, Ho Chi Minh City, one of the most popular temples of the city. Ky Yen Festival includes craft ancestors remembrance ritual, Buddhism praying ritual, and many more other rituals.

A legend tells us that at the place now this temple is built on, in the past people here once lived in poverty. One day, a villager caught a crown hat that often wore by government’s officials that time from the channel. The villager supposed that hat belonged to a soldier of the defeated army so he brought to a small hill and made a praying ritual. Since then, the village constantly had a bumper crop and people life was improved so much. The temple was built to show their gratitude and each year they hold a festival to celebrate.