Besides the well-known Pho, there are many more kinds of soup that are not as popular but just as flavorful, delicious and healthy. Each region, in turn, has to its own a variation of a particular dish with distinctive features and taste, making Vietnamese cuisine so diverse. 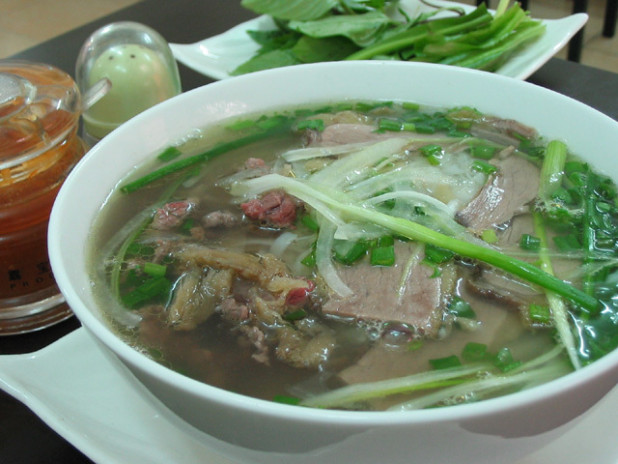 Nowadays, you can easily find Pho from luxury restaurants to humble food-stalls across the country. In Vietnam this dish is originated from Hanoi and Nam Dinh where Pho is considered most popular, original and delicious. Yet Pho from Hanoi and Pho from Nam Dinh are quite different in taste.

Pho is usually eaten in a large bowl, containing Pho noodles, broth, meat and herbs. The noodles are made from rice while broth made from simmering cow’s bones or pig’s bones with a lot of spices such as cinnamon, anise, grilled ginger, cardamom, cloves, coriander, and grilled onions. Beef and chicken are mostly eaten with Pho. The dish tastes best when it’s still hot. Herbs served together with Pho are onions, bean sprouts, coriander leaves, basil leaves…. You can add chilli and lemon according to your taste.

The broth is the most important thing of Pho which is required to be lightly sweet, fragrant and transparent. Pho in Hanoi is believed to have the original taste. Pho can be used for any meal of the day, but mostly for breakfast.

Around Old Quarter, Pho is at every corner. A famous Pho restaurant you should give a try if you want to taste the traditional version of the dish locates at number 10 Ly Quoc Su street. Price ranges from VND 55,000 to VND 70,000. 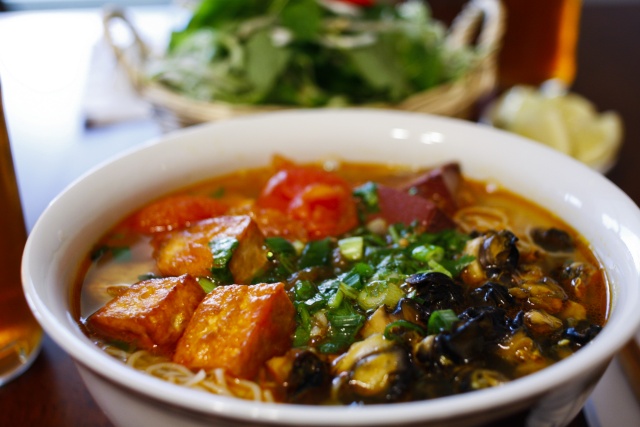 Bun Oc (Snail Noodle Soup) is one of the most popular dishes with snails in Vietnam. Foreign travellers would find this dish very intriguing but in Southeast Asian countries foods featuring snails are pretty common. Bun Oc is from Hanoi and has been around for a long time. Hanoi people eat Bun Oc mostly for breakfast when the snails are still fresh. The broth must be made by simmering pig’s bones for hours. A spice called “dam bong” is used to create sour taste together with tomatoes. The snail must be fast enough, medium-sized and the shells should be yellow. Cooking the snails immediately is not recommended. It’s a common knowledge that soaking the snails into water derived from rice washing 1 to 2 days would clean the mud and moss in their stomach.

There are two ways to eat Bun Oc: hot and cold. Cold Bun Oc is best in summer while hot Bun Oc can be eaten all year. A bowl of hot Bun Oc contains noodle, pork-based broth, snails, fried tofu and few cubes of blood cake. Served with vegetable and herbs like fennel,  perilla, marjoram, basil… You can pay VND 35,000 to VND 45,000 for a Bun Oc in Hanoi.

You can come to:

Or you can just walk around the Old Quarter and seek for signs with “Bun Oc” written on. 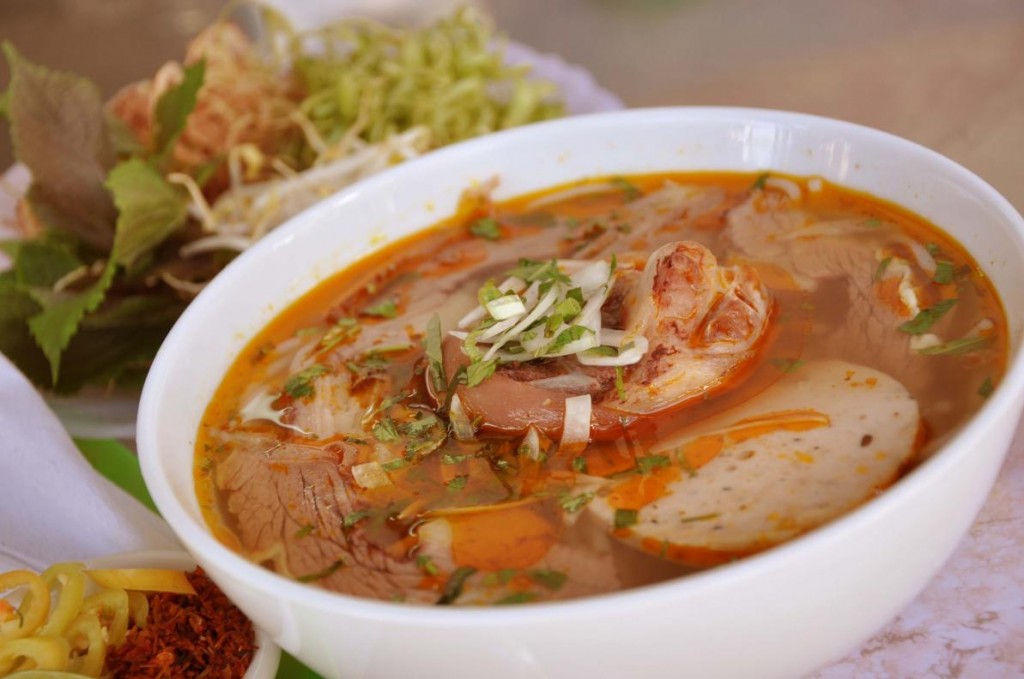 This one is famous too. Just so you know, every province has dishes with Bun (rice vermicelli) but Bun Bo Hue is a speciality from Hue – a city on the coast of central Vietnam. The special thing about Bun Bo Hue is its trademark reddish broth made from hours of simmering pig bones, pig’s leg and spices. You won’t be able to forget the spiciness of chillies, the unique fragrance of lemongrass, and the sweet taste of “ruốc” (meat floss), making a combination which isn’t found anywhere else.

Even Hue people have no idea where did this dish fantastic dish come from and when. Even the name “Bun Bo Hue” is questionable because “beef” is not a traditional food of Vietnamese people. Beef only invaded Vietnam cuisine when western cultural influenced became more obvious. Perhaps beef was only added after to the dish as a variation of pork. Not many eaters can stand the spiciness of real Bun Bo Hue so the dish now is modified significantly. Vermicelli is served in a large bowl, with broth and toppings which can be various. The main topping can be either pig’s leg or beef; cubes of congealed pig’s blood, beef tendons, chopped crab meat can be added accordingly. Bun Bo Hue is served with a lot of herbs such as bean sprouts, banana flowers, lettuce, and onions. The dish can be eaten in anytime in a day.

You don’t have to come to Hue to taste decent Bun Bo Hue but we do recommend Dong Ba market to try out not only Bun Bo Hue but many other Hue’s delicacies.

In Hanoi, you can visit a few restaurants we recommend below: 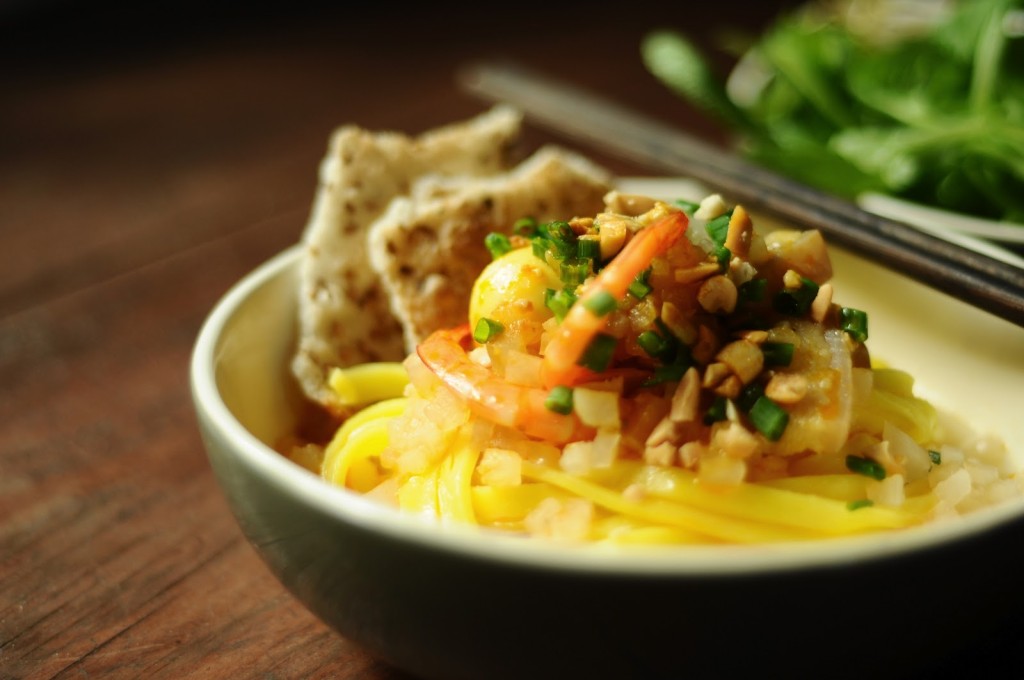 If you visit Danang or Hoi An or any province in central Vietnam, you would be recommended to try Mi Quang, a famous regional noodle soup of Vietnam cuisine. Mi Quang is originated from Quang Nam with the remarkable and unique light yellow rice noodles.

Quang Nam people make this dish at in every occasion they have like feasts, gatherings, or just weekends. One can say that there might be a Hanoian who never cooked Pho or a Saigonese who doesn’t know how to make Hu Tieu but there won’t be a single person from Quang Nam who never cook Mi Quang.

The difference is Mi Quang using a lot less broth than other kinds of soup, also made by boiling pig’s bones. Many toppings can be featured from chicken, pork, egg, fish or jellyfish. One or two pieces of grilled sesame rice-paper will be put in the bowl. The fragrance of peanuts and the crunchiness of rice-paper are what makes the taste of Mi Quang so special.

In Da Nang, you can visit: 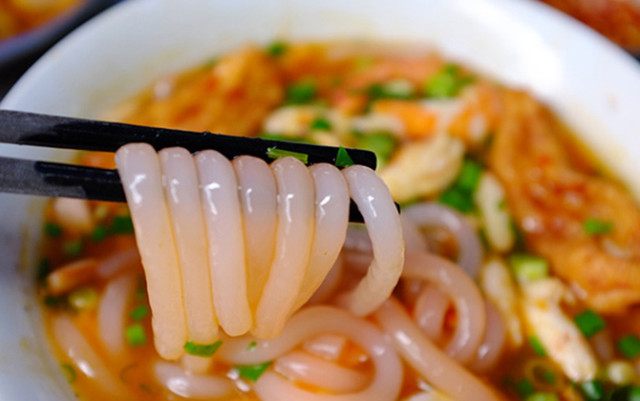 Banh Canh is from the South and also most seen from Central to South Vietnam, and just recently in Hanoi. Banh Canh’s noodle is quite different from other kinds since it’s not entirely made from rice but rather from cassava or wheat flour or cassava mixed with rice flour. Therefore it has a distinctive taste to Pho or Bun, quite like a kind of jelly. In its original form, Banh Canh’s noodle is made short or long in roundly tube shape and almost transparent white-coloured. The spices and toppings used in Banh Canh can be really diverse. It’s often eaten with seafood such as shrimps, crab, chopped fish, fish, pig’s leg and pork.

Banh Canh with chopped fish in Quy Nhon is very famous for its delicious taste and cheap price, only from VND 15,000 to VND 25,000. 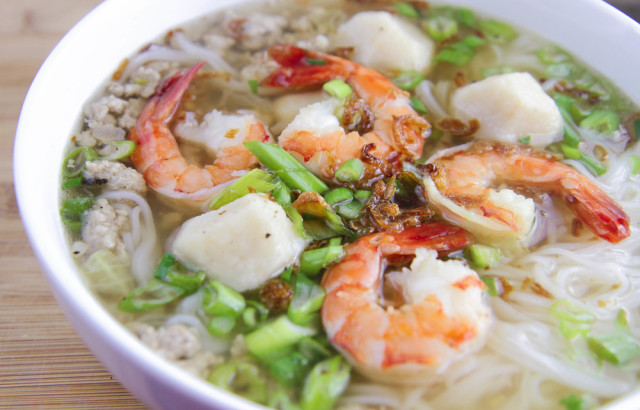 Hu Tieu is a dish that you can mostly find in the south of Vietnam, especially in Saigon. The dish has its origin from China.  The name itself means “noodle” in illustration for this, “hu tieu” is a dish that used noodle made from rice of people in the south of China. The dish became popular in many countries in Southeast Asia like Vietnam (South), Cambodia, Thailand and Singapore.

During the 50s, Hu Tieu was easy to find on any street, any corner of Sai Gon. And to Saigonese, Hu Tieu is like what Pho is to Hanoians. The dish is eaten for breakfast and dinner, rarely for lunch.

The broth is made with minced meat and pig’s intestines. The noodle then is dipped in boiling broth, toppings and herbs finally added to make a bowl of Hu Tieu.

There are two versions of Hu Tieu that are so famous, Hu Tieu Nam Vang (Cambodian version) and My Tho (Vietnamese version in My Tho).

In Hanoi, you can visit the places below for decent Hu Tieu:

In Ho Chi Minh, come to: